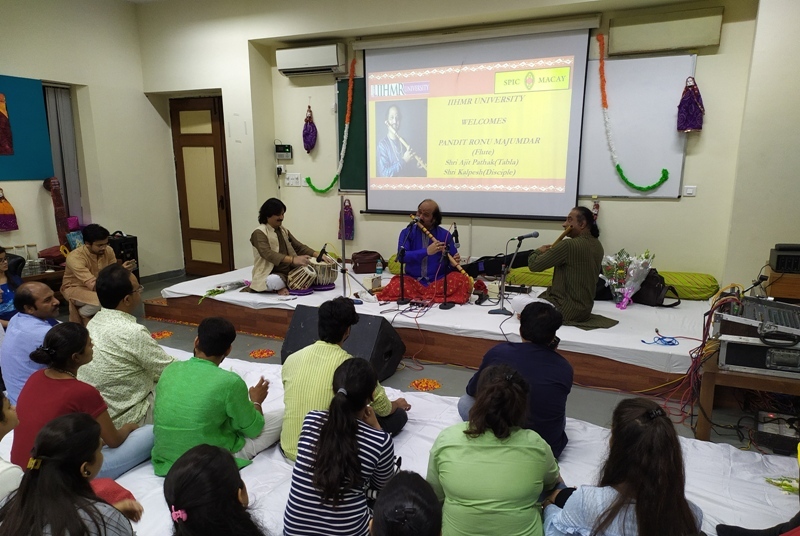 
September 2019: Revered flute maestro Pt Ronu Majumdar entertained the halls and inhabitants of the IIHMR-U with a heartful rendition today evening. His mesmerizing bansuri the performance took the present generation to an era that is unfamiliar yet comforting to their minds and soul. India’s Premier Institution in Hospital and Health management IIHMR-U Jaipur hosted Society for the Promotion of Indian Classical Music And Culture Amongst Youth (Spic Macay) Virasat Series, in its premises.

The much-awaited event was commenced with a welcome, at the Director’s Bungalow. A green room session was conducted where students interacted with the maestro and his troupe. Introduction to Spic Macay, along with a short film and felicitation took place, post which a lilting and mesmerizing performance by the maestro, especially his rendition of Raag Nagaswaravali, left people enthralled and wanting for more. The artists were heralded by Mrs. Manisha Agarwal and He was accompanied by the spellbinding Ajit Pathak at the table and his beloved disciple, Kalpesh Ji. The captivating evening ended with a rousing vote of thanks and high tea.

“I am pleased to perform in this prestigious event, as well as this illustrious venue. Spic Macay has held an important part of my life, with 25-28 yrs of association with mine, owing to its endeavor towards promoting awareness among youth. Indian classical music is a jewel that both our youth and old should hold pride in and I have been extensively touring to promote this. While it’s essential to understand and imbibe other's cultures, it shouldn’t be conducted at the cost of losing the essence of our own heritage. Music elevates and transcends from being just a means of entertainment to an all-encompassing asset to life. I hope that such event instills love and faith for this branch of music” said Pt Ronu Majumdar.

“India has been synonymous with a crackling heritage spanning decades which we have held pride in. In the terms of performing arts, India has always held the fort, inviting admiration and envy amongst foreign counterparts. Naturally, it is harrowing to know that the youth of the nation are oblivious to this goldmine. We are pleased to associate with Spic Macay in creating this awareness amongst youth, as we host the esteemed Flautist Pt Ronu Majumdar under our roof. Today, Ronu Majumdar is amongst the more popular musicians on this instrument and is especially popular with the younger generation for his creative improvisations. Apart from his concerts all over India in different music festivals, he also participated in the Festival of India in Moscow and Asiad '82 in New Delhi. His scintillating performance has left us yearning to bring more such performances into this institute” said Dr. Pankaj Gupta, President, IIHMR University.

Ranendra Majumdar, popularly known by his stage name Pt. Ronu Majumdar, is considered the most respected name in the Indian Flute Playing of this era. When it comes to Flute, Pt. Ronu Majumdar is a style maker and has invented a unique style of rendering the Raga, which has a good mixture of ‘Drupad Gayaki’ with ‘Laykari’. He is credited for making a flute, a popular musical instrument amongst the youngsters of this era all over the globe. He has toured extensively in Europe, the United States, Canada, Japan, Singapore, Thailand, Australia, New Zealand, and the Middle East. He has been associated with Pandit Ravi Shankar on albums like Passages and Chants of India. Majumdar is also known for a number of collaborations and jugal-bandis with other leading instrumentalists. An innovative composer, he has also composed several pieces in a fusion of Hindustani classical with other forms of music, particularly Western classical music, including the projects Carrying Hope (Music Today), A Traveller's Tale, Song of Nature (Magnasound), KalAkelaKahan (Plus Music).

The much-awaited event was commenced with a welcome, at the University. A green room session was conducted where students interacted with the maestro and his troupe. Introduction to Spic Macay, along with a short film and felicitation took place, post which a lilting and mesmerizing performance by the maestro left people enthralled and wanting for more. The artists were heralded by Mrs. Manisha Agarwal and this captivating evening ended with a rousing vote of thanks and high tea.

Established in 1984, IIHMR University is a leading knowledge institution of the country engaged in teaching, research and training in the domains of public health, health and hospital administration, pharmaceutical management and rural development. Over the past thirty years, IIHMR has carved a niche for itself among management institutions, both in India and abroad. The institute is the World Health Organization’s Collaborating Centre for strengthening Health Systems based on Primary Care and is termed as an ‘Institute of Excellence’ by the Government of India’s Ministry of Health and Family Welfare. IIHMR has already conducted more than 600 research projects and studies on the health, social and developmental systems and policies in India and the wider South-East Asian Region. Now stepping in the fourth decade, we strive to generate knowledge to help develop effective health, social and public systems, and socially relevant health technologies.

BuyEssaysCheap.com - affordable writing help
Online assignment help by Copycrafter will free you from any academic issues
There is no better press release writing company as 123 term papers.
Buy 100% high-quality replica watches with a 2-year warranty and free ground shipping!