Ramesh Meer On The Board of AAFT School of Animation 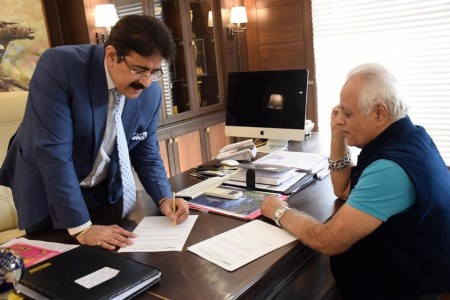 “Ramesh Meer is the Chief CreativeDirector & CEO of The FX Factory, who has an experience of 50 years in the creation of Special Visual Effects for motion pictures and television as well as every aspect of film and television production,” informed Dr. Sandeep Marwah President of AAFT University.

He has created Special Visual Effects for all Manmohan Desai films from Dharmveer to Naseeb and Mohan Sehgal films from Santaan to Daulat as well as films like Kamal Amrohi’s Razia Sultan and more than 200 feature films much before digital technology came into force.

The varied range of Special Visual Effects he has worked on include optical, mechanical, miniatures, glass shots, pyro-technical effects and blue as well as green screen travelling mattes and chroma keys. Ramesh Meer is a graduate in cinema and now teaches the art and technology of Digital Visual Effects as a guest lecturer in various universities.

As a creative director and visual effects supervisor, he has supervised and worked on the Visual Effects of more than 500 feature films, 800 tele serials as well as more than 1000 television commercials in the last four decades.