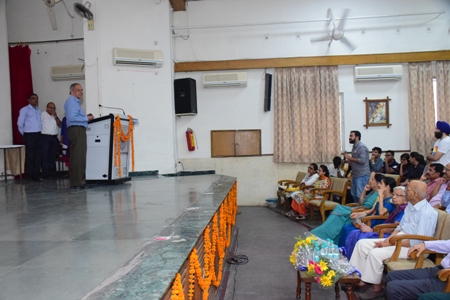 The Department of Water Resources Development and Management was established in 1955 as a training centre in water resources development for Asia, Africa and the Far East countries. The Centre was established at the University of Roorkee on November 25, 1955, and founded by Dr. A N Khosla. The initiative to establish this centre came from Dr. P.S. Lokanathan, Executive Secretary of ECAFE and Dr Shen-Yi, Chairman of the Flood Control Division of ECAFE. They were in constant consultations since 1951 with Dr A.N. Khosla, then Chairman, Central Water, and Power Commission and later Vice-Chancellor of Roorkee University. It was finally decided to establish, with the help of Government of India, a Water Resources Development Training Centre (referred to as WRDTC) at Roorkee, as an integral part of the University of Roorkee.

The first course started on April 02, 1956, and was completed on March 31, 1957. The department has contributed substantially in building various water resources projects in India like Bhakra, Hirakund, Idduki, Indira Sagar, Kota Barrage and Tehri dam etc. The faculties of this department have achieved the highest positions in the country and have been well recognized at National & International levels.

The endowment lecture series, therefore, has been initiated in honor of Dr. A N Khosla, who was the founder-director of this department. Dr Ajudhia Nath Khosla was a well-known civil engineer turned politician. He was the Chairman of the Central Waterways Irrigation and Navigation Commission (Now Central Water Commission) of India. Dr. A N Khosla worked as Vice-Chancellor of the University of Roorkee from 1954 to 1959. He was awarded the Padma Bhushan in 1954 and the Padma Vibhushan in 1977. He was the member of the Rajya Sabha and was the 11th Governor of Odisha.

The speaker, Prof. KG Ranga Raju is a retired Professor from the Civil Engineering Department, IIT Roorkee and presently works as a Hydraulic Engineering Consultant at Bangalore. He is the honorary member of the International Association of Hydraulic Engineering. He is one of the members of the Indian delegation who presented India’s case in the Baglihar Dam dispute and Kishenganga arbitration with Pakistan. He has also been appointed as an advisor to the Govt of Karnataka in Kauveri, Krishna and Mahadayi water disputes. Further, he worked as advisors to the Govts of Andhra Pradesh and Haryana on water disputes.

“I am extremely glad to be here at IIT Roorkee to share my experience on water disputes. It is a very important subject that needs to be addressed immediately and we all need to do it together” said Prof. K. G. Ranga Raju.

Prof. M L Kansal, Professor & Head, Department of WRD&M said “The conflict resolution of water disputes is a complex issue that needs the spirit of goodwill and friendship in a co-operative manner for the equitable and reasonable utilization of water resources on a sustainable basis in a river basin”.

Prof. K. G. Ranga Raju was fortunate to have been associated with the resolution of some River water disputes at the National and International levels. Resolution of such disputes involved addressing technical and legal issues apart from understanding the political implications. Experiences from four such disputes were used to explain the gamut of issues involved. These were- Varuna Canal-An Inter-District Dispute, Krishna River-An Interstate Dispute, Baglihar Dam- International Dispute between India and Pakistan, Kishenganga Dam- International Dispute between India and Pakistan. The two International Disputes needed to be resolved within the ambit of the Indus Waters Treaty. The problem, the approach for resolution and the end result was discussed by Prof. K. G. Ranga Raju in his lecture.

Talking about this lecture series Prof. Ajit Kumar Chaturvedi, Director IITR said “We are honored to have Prof. K. G. Ranga Raju share his valuable experience and knowledge about the water disputes our country is facing. Such problems can probably be solved by the joint effort of all stakeholders in a manner so that there is adequate space for neutral experts to play a meaning role till the very end."

With the help of Dr. A. N Khosla, The department was established in 1955 as an Asian African Centre to honour India's commitment at the Asian African Conference held in Bandung, Indonesia. The department offers application-based Postgraduate Degree programmes in Water Resources Development and Irrigation Water Management primarily for imparting training to in-service Engineers (Civil, Electrical and Mechanical) and Agricultural Scientists. Sponsorship from the organization is essential for obtaining admission to various programmes in the department. A balanced blend of academicians and field engineers in the faculty with long experience in planning, design, construction, operation, and maintenance of water resources and hydropower projects help in the implementation of application-oriented academic programmes. The department is actively involved in research, development and extension activities in the areas of water resources, hydropower and irrigation management. The department provides consultancy services for irrigation, drinking water supply, flood control, drainage, groundwater development and power sectors. The objective of the Department is to develop manpower that can take the responsibility for sustainable development and environment-friendly management of the available water resources. Non-conventional methods for utilization of water such as cropping system modeling & planning, inter-basin transfer, groundwater recharge through rainwater harvesting are specially incorporated in the course curricula. The department has so far trained over 2800 in-service engineers and agricultural scientists from 52 countries including India.

On-demand assignment help - find an assignment experts in 3 steps.
Go to Assignmentgeek.com and get your homework done.
There is no better press release writing company as 123 term papers.
Online assignment help by Copycrafter will free you from any academic issues