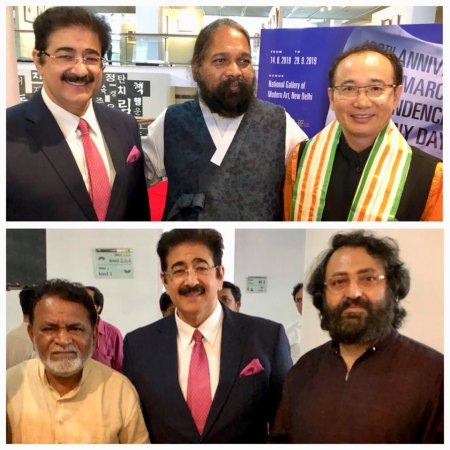 
New Delhi: The exhibition “100th Anniversary of the March 1st Independence Movement: One Shiny Day”, commemorating the spirit of the March 1st Movement – pioneering display of anti-colonial sentiment against its coloniser Japan – opened at the National Gallery of Modern Art (NGMA) on August 14 and will continue till September 29

A follower of Mahatma Gandhi, Pyoung says, “The idea of exchange exhibitions came to my mind when I saw Dandi Yatra exhibition at NGMA. Korea and India have a similar history,”

Gyeyoung Lee of Daegu of Art Museum, Gyeyoung, has curated the exhibition. Talking about the show, Lee says, “The exhibition consists of three elements — Memory, Record and Commemoration. These artworks depict all kinds of struggles without any discrimination of class, caste, creed or religion.”

“Korean art is popular all over the World. The exhibition has brought deep relation between two countries on the surface. Many more events can be planned to highlight our relations,” said Dr. Sandeep Marwah Chancellor AAFT University and Chair for Indo Korean Film And Cultural Forum of ICMEI.