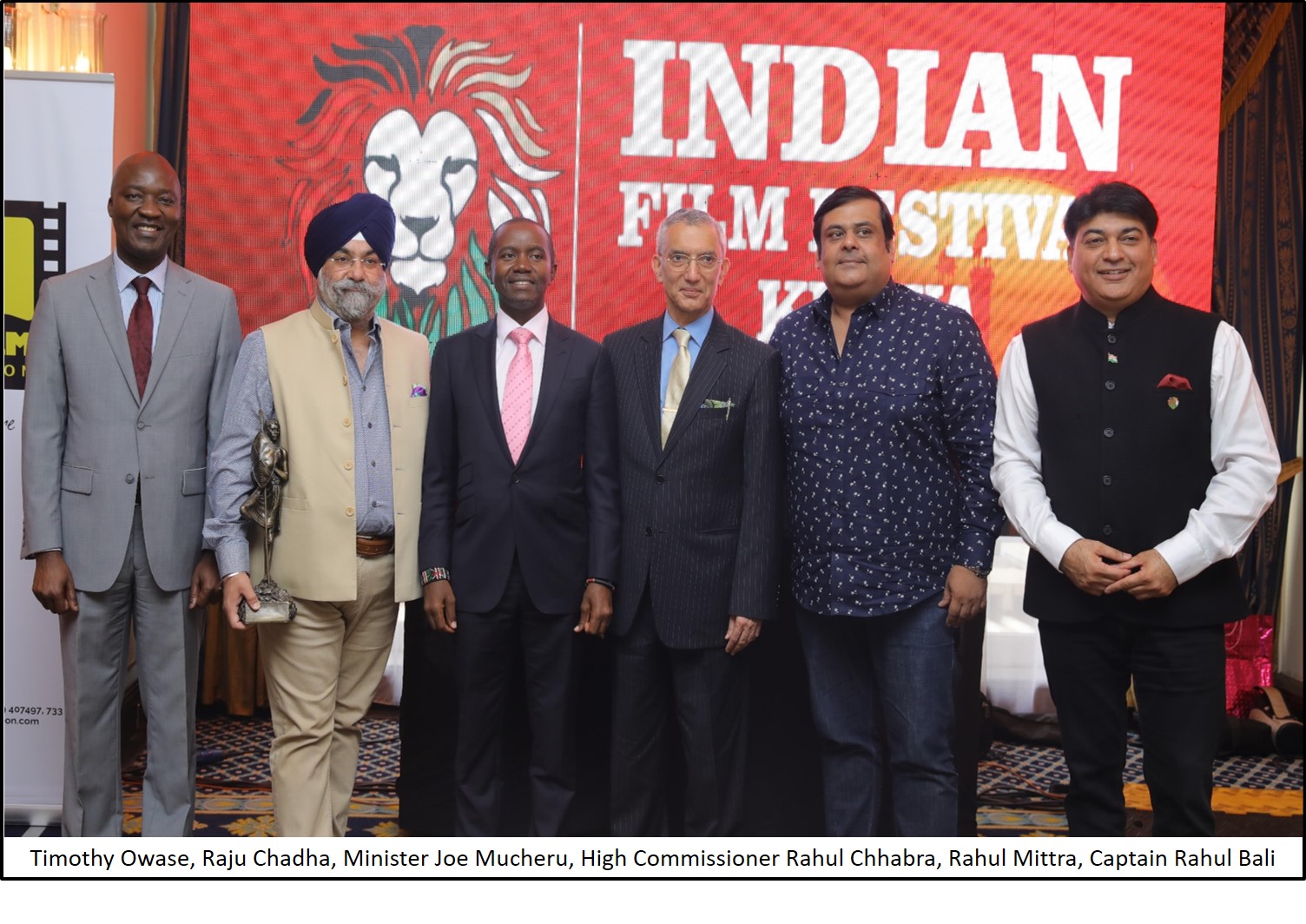 
NAIROBI 17th August 2019: The First Ever Indian Film Festival Kenya organised by the High Commission of India, Kenya Film Commission and Indian Film Festival Worldwide (IFFW) concluded on high note in Nairobi coinciding with India’s 73rd Independence Day.
The Festival attended by Crème da la Crème of Africa, was marked by the presence of Minister for Information, Communication & Technology Mr. Joe Mucheru and His Excellency, Indian High Commissioner to Kenya Mr. Rahul Chhabra.
Superstar Arjun Rampal, Former Miss World Diana Hayden, Top Film Makers Raju Chadha, Rahul Mittra, Umesh Shukla, Dharam Mehra, Ajay Arora, Sippy Chadha & Miss World Tourism Ishika Taneja walked the Red Carpet and were awarded for their contribution towards Cinema.
Six blockbuster movies were showcased during the festival – Daddy, OMG, Highway, Wrong Side Raju, Nanak Naam Jahaz Hai and Subira which were loved by the audience in Kenya.
The weeklong festival curated by Captain Rahul Sudesh Bali also saw the Indian Delegation getting mesmerized by the world’s largest and the scenic game reserve – Masai Mara National Reserve and Barefoot Escape to Kenya’s Turquoise Waters, White Sand Beaches as well as the Isolated Islands in Mombasa.
Captain Rahul Bali, who has been curating Indian Film Festivals across the globe said that he always wanted to curate a film festival in Africa and his obvious choice was perhaps Kenya as no other place on the planet conjures such a spirit of adventure and romance. The diversity of Kenya dazzles all who visit, viewing the country's abundant wildlife, beaches and what not!
Superstar Arjun Rampal said, “Kenya is a truly a land of contrast, beautiful destinations and lovely people and I am in love with Kenya”. Film Maker Rahul Mittra added, “He had been all around the world but Kenya is perfect in every way and nothing matches the calmness and warmth around Mombasa and the astounding wildlife of Masai Mara.”
The Indian Film Makers spell bound with the beauty of Kenya and warmth of Kenyans were absolutely convinced to come back and start filming in Kenya. “With ICT Minister Joe Mucheru pledging to review the Films & Stage Plays Act of Kenya to make it more friendly for movie makers, its surely time for some Bollywood action in Kenya and we look forward to shoot a film here soon,” said Film Maker Raju Chadha.
The Festival was supported by KNCCI, SAFARICOM, NRSA, WESTGATE MALL, SAFARI TRAILS and one of the finest hotel chains of Africa – SAROVA HOTELS & RESORTS. The Indian Delegation experienced the spectacular hospitality of Sarova Hotels across Nairobi, Mombasa and Masai Mara.
The Indian Film Festival closed with an interactive Round Table Conference which was a business forum where various opportunities and challenges were discussed among the Indian Film Makers and key stake holders from Kenya to promote Kenya as a preferred film shooting destination. The Festival marked the presence of some of the biggest names in Kenya like Cricketing Legend Aasif Karim, CFO SAFARICOM Sateesh Kamath, CEO KNCCI Angela Ndambuki, Chairman Kenya Tourism Jimmi Kariuki, CEO Kenya Film Commission Timothy Owase, CEO NRSA Zuhura Ogada & Rajay Singh of Safari Trails and a galaxy of African Actors and Film Makers.
The Indian High Commissioner Rahul Chhabra said, “Initiatives like The Indian Film Festival Kenya are sure to promote the bilateral relations between India and Kenya to the next level. I am extremely delighted by the participation of Indian Film Fraternity as well as the response of both the Government & people of Kenya towards this honest endeavour and we want to make it an annual event in our calendar of events”.

Go to Assignmentgeek.com and get your homework done.
There is no better press release writing company as 123 term papers.
Online assignment help by Copycrafter will free you from any academic issues
On-demand assignment help - find an assignment experts in 3 steps.