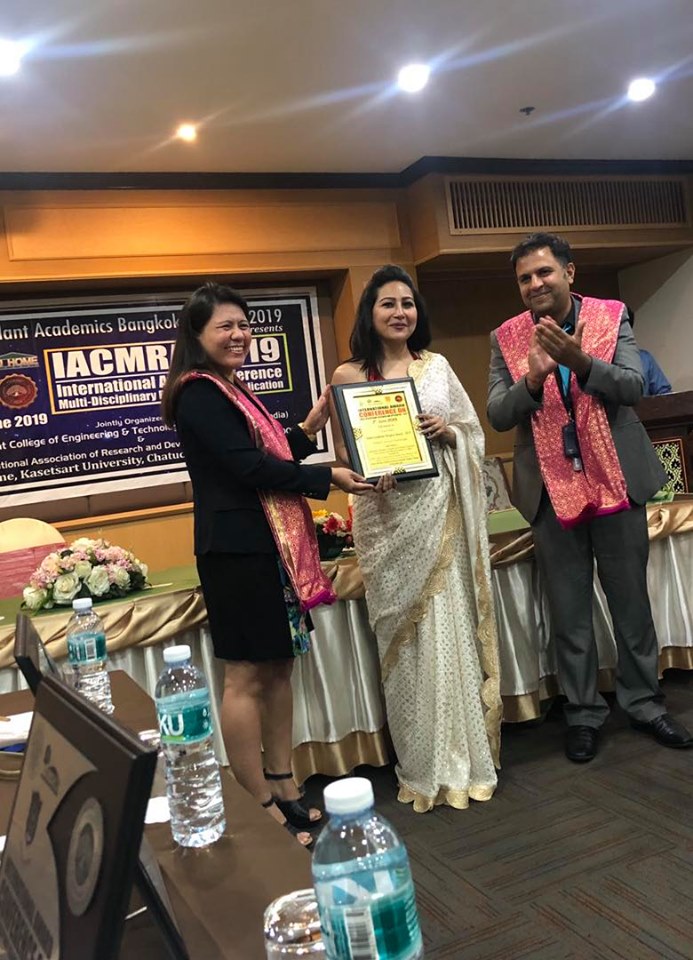 
After creating a mark of excellence in the psychology and advocacy industry, Mrs. Anuja Kapur is on a spree to add more feathers to her cap. Recently Anuja Kapur was honored with an award in Bangkok by Vedant Academics Bangkok Award 2019 for Indian Criminal Psychologist. The award ceremony was held at KU Home at Kasetsart University Bangkok. The event was jointly organized by Vedanta College of Engineering and Technology, Kota, Rajasthan, India along with International Association of Research and Developed Organization (IARDO).

In the words of Mrs Anuja Kapur, Criminal Psychologist and Advocate, she started by congratulating the organizers for hosting a wonderful event and thanking the jury for recognizing her work and awarding her for the same. She further introduced her life journeys up and down phases, her weak and strong moments, her role models in her life and the role of her family, friends and well wishers who supported her thick and thin. She further added, that impossible to reach the epitome of the success without a team. She thanked her team members for supporting and guiding her.

Mrs. Anuja Kapur is very known name in media for her expert views on various fields such as Criminology, Psychology, Victimology and Law. She has been known as Indian Criminal Psychologist for decades. She has also mastered advocacy by filing various PIL’s in Supreme Court and High Court on various social issues asking for direction and amendments in existing laws.

BuyEssaysCheap.com - affordable writing help
Online assignment help by Copycrafter will free you from any academic issues
There is no better press release writing company as 123 term papers.
On-demand assignment help - find an assignment experts in 3 steps.
Go to Assignmentgeek.com and get your homework done.