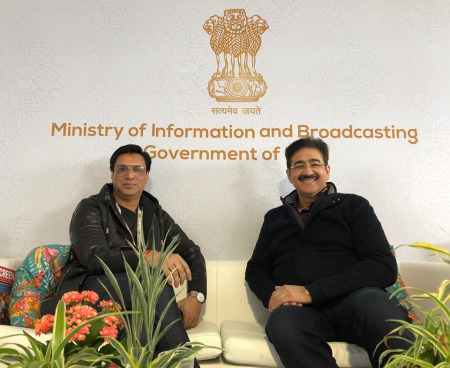 
Cannes: The Indian Pavilion at Cannes International Film Festival is always a meeting point for Indian filmmakers. This time the Pavilion was handled by FICCI. Secretary Information and Broadcasting Amit Khare inaugurated on the first day.

“I am lucky enough to be on the Jury of first Mobile International Festival, Cannes and also Co- President with Global Short Films Awards Cannes,” informed Sandeep Marwah President of Marwah Studios.

Present at India Pavilion Madhur Bhandarkar congratulated Sandeep Marwah for his untiring efforts and achievements in media and entertainment industry.