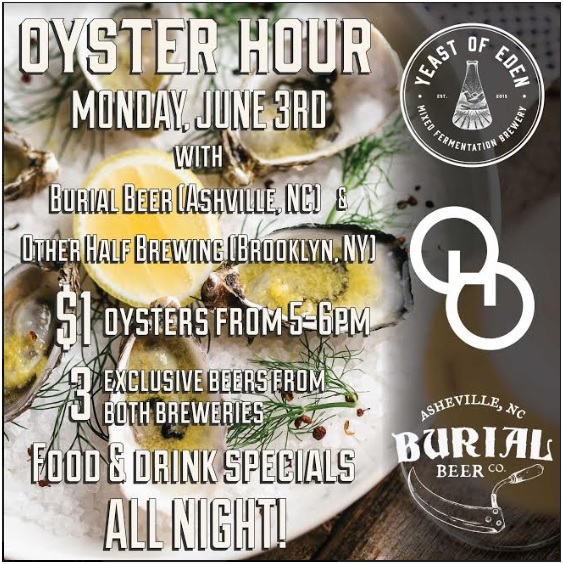 
Carmel’s most exciting new restaurant and bar, Yeast of Eden, will launch a new Oyster Hour as well as host two acclaimed East Coast brewmasters for a major beer event at the Carmel Plaza brewpub on June 3.

Carmel, CA, June 05, 2019 — Carmel’s most exciting new restaurant and bar, Yeast of Eden, will launch a new Oyster Hour as well as host two acclaimed East Coast brewmasters for a major beer event at the Carmel Plaza brewpub on June 3.

The event will feature three draft beers from each brewery, Burial Beer out of Asheville, North California and Other Half Brewing out of Brooklyn, New York, plus an Oyster Hour with fresh oysters for $1 each, as well as food and drink specials all night.

The Oyster Hour event with the two brewmasters will be from 5-6 p.m. Monday, June 3, with happy hour from 3-5 p.m., where Yeast of Eden and Alvarado Street Brewery beers will be $4 and there will some great food specials. The new Oyster Hour will be held from 5-6 p.m. every week, Monday through Thursday.

“Both brewmasters and owners of Burial and Other Half, Douglas Reiser and Sam Richardson, will be in attendance,” said Yeast of Eden co-owner J.C. Hill. “We've never had the privilege of serving beers from these two breweries on the central coast, so this will be a real treat to our locals who are into craft beer.”

Hill said that the two brewmasters are attended the Firestone Walker Invitational beer festival in Paso Robles this weekend. It's one of the most prestigious beer festivals in the country, drawing thousands of people and a highly selective list of brewers from all over the U.S. and worldwide. Alvarado Street Brewery will be participating in this festival along with their peers.

Yeast of Eden is located on the lower level of Carmel Plaza, Suite 112, at Mission Street and Seventh Avenue in Carmel-by-the-Sea.

About Yeast of Eden
Yeast of Eden started as a lighthearted pun turned passion project for co-owner J.C. Hill and now Head Brewer Andrew Rose in 2014. Born out of an obsession with oak in the early days of Alvarado Street Brewery, Hill and Rose were allured by the seemingly limitless potential of mixed fermentation beer (a catch-all term of a genre of beers that have been fermented with various microflora that includes wild yeast and lactic acid bacteria) and it’s interaction with oak wine barrels in the aging process. So much so that Yeast of Eden became it’s own brand once Alvarado Street expanded their brewery operation in 2016 with the opening of a larger production facility in Salinas.

Fast forward to December 2018, and Yeast of Eden opened its first brick-and-mortar location with a restaurant and bar in the south wing of the Carmel Plaza in downtown Carmel-by-the-Sea. The brewpub features 120 seats inside and 40 seats in an outdoor courtyard patio, all in a hip, contemporary design aesthetic. The menu features global, street-food inspired cuisine to pair with the crisp, effervescent open-fermented beers made on-site.