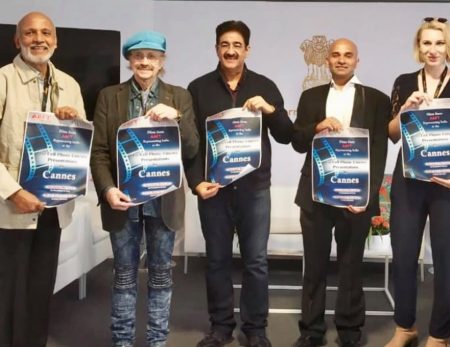 
Cannes: AAFT- Asian Academy of Film And Television is participating in the first ever Mobile Cinema Presentation at Cannes, France during the 72nd International Film Festival at Cannes.

A poster of this first presentation was launched at the India Pavilion to highlight first ever Mobile Cinema Competition. “ We are feeling proud to be the part of this first ever Mobile Cinema Presentation at Cannes. I am thankful to Ministry of Information And Broadcasting, Government of India for providing us this platform to launch the poster,” said Sandeep Marwah President of ICMEI.

“I am happy to be here and privileged to release the poster of AAFT presentation in Mobile Cinema,” said Padamshri A.K.Bir renowned filmmaker and National Award winner from India.

“We started the first ever Mobile Film Festival in the World 12 years back in India –International Festival of Cellphone Cinema and now it has grown very big. This time we received 6500 entries from all over the World. We started another one in Budapest Hungry and now part of Cannes Cellphone Cinema Competition,” said Prof. Karl Bardosh filmmaker from New York.

Many filmmakers from all over the World attended the event. The India Pavilion was full of excitement and appreciation. AAFT Alumnus Amit Agarwal and renowned actress from United Kingdom Katianna Ley joined in poster release.

On-demand assignment help - find an assignment experts in 3 steps.
Go to Assignmentgeek.com and get your homework done.
There is no better press release writing company as 123 term papers.