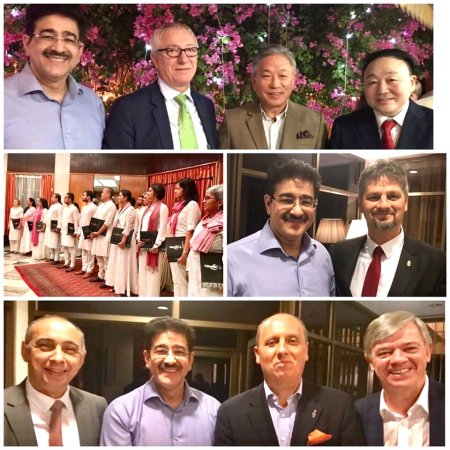 
New Delhi: The Cultural Counsellor at Embassy of Hungary in India and Director of Hungarian Information and Cultural Centre Dr. Wilhelm Zoltan has completed his tenure of four years in India and now leaving for home to join Academics.

“We all will miss you and your enthusiasm, zest and zeal to project Hungary through art and culture in India has added a lot to cultural diplomacy,” said H.E. Gyula Petho Ambassador of Hungary to India in a grand farewell organized in honor of Dr. Wilhelm Zoltan at the residence of Ambassador.

“Great is the art of beginning, but greater is the art of ending. We have wonderful relations with Hungary, we enhanced our interaction much more during the tenure of Dr. Wilhelm. Recently I have added another prestigious award from the film fraternity of Hungary during my last visit to Budapest. We wish Dr. Zoltan a very bright and cheerful days,” said Dr. Sandeep Marwah Chair Indo Hungarian Film And Cultural Forum.

“My wife joins me in thanking every one who has contributed in making my journey very successful in India,” said Dr. Zoltan Emotionally.