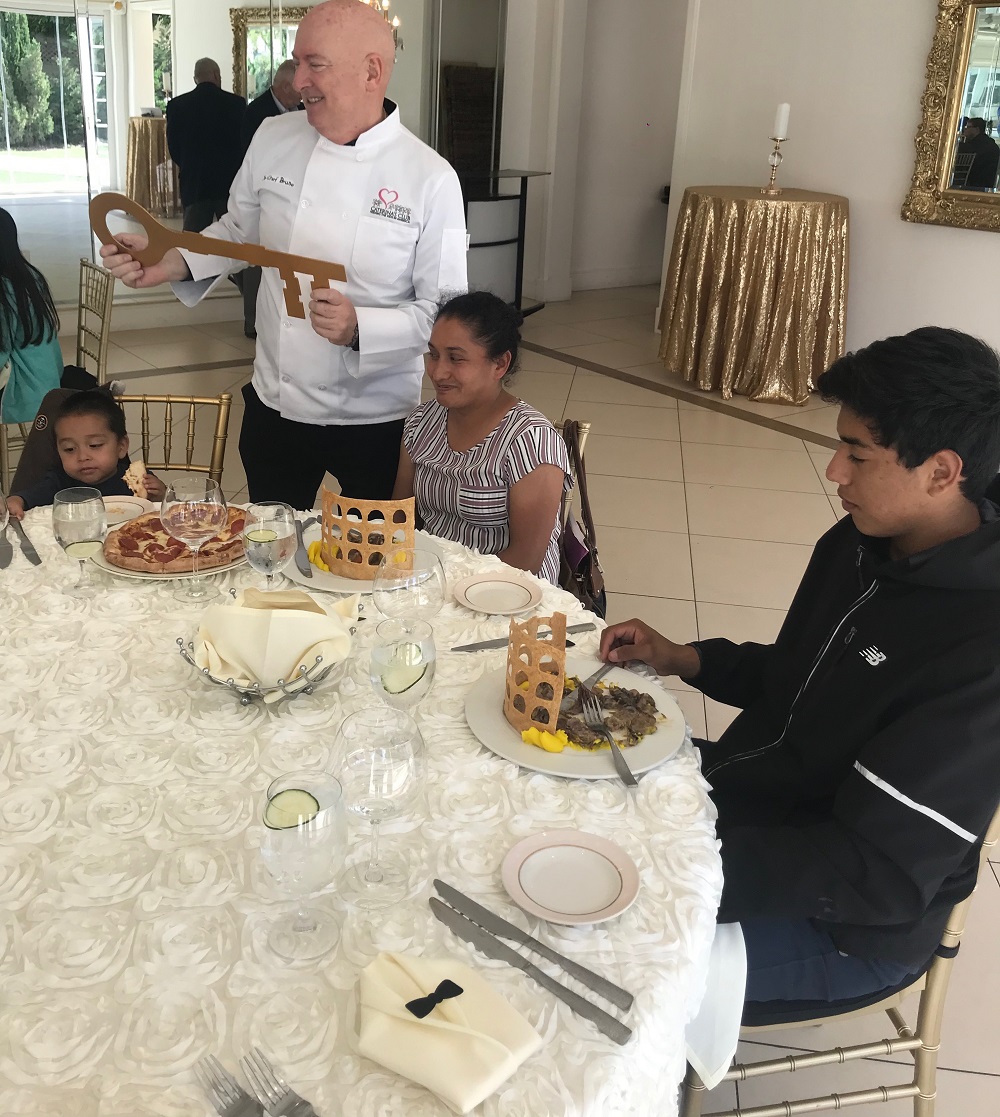 
Six underprivileged families — some of whom were homeless or living in cheap, crime-ridden motels — were surprised with new homes thanks to Sir Bruno Serato’s Caterina’s Club, best known for feeding some 5,000 hungry children throughout So Cal each night. The selected families all work but lacked the funds necessary to cover the initial first and last months rent plus security deposit required to secure a lease. The event marked the 200th family placed in permanent homes thanks to the nonprofit that Serato named on behalf of his beloved mother, Caterina.
Among the families who were surprised with new, permanent housing:
· Kini Huang — The single mother of Kalia, 10, Koa, 5, and Kai, 4. Family were living in a shelter for abused and now live in an apartment in Costa Mesa.
· Brandon Kaihewalu & Isabelle Vera — The couple plus their kids, Annalea, 8 and Sapphire, 1, and mother-in-law, Janna Urias, have moved into a new apartment in Santa Ana. They had previously lived in a cheap motel in a high crime area. Kaihewalu is searching for employment while Vera works at a local bakery and her mother, Urias, works for a cleaning company. He was released from prison more than a year ago determined to turn over a new leaf and has stayed sober for more than 1 year.
· Johnathan Hernandez — is a single father with 9-year-old daughter Evoni. They were living in cramped quarters at a family member’s home. He works for Volunteers of America and the family now has an apartment in Santa Ana.
· Asia Chaney — Ironically, she works for a nonprofit that places families in need into housing. She is a single mom of 5-year-old, Israel. They had been living with friends but were in cramped quarters. They now reside in an apartment in Fullerton.
· Douglas Schneider — The 72-year-old retired Air Force veteran is a single father to Sterling, 17, and MacKenzie, 15, both of whom will be living in an apartment in Buena Park.
· Karina Abarca — A single mother and domestic violence survivor, she and her son, Jose, 2, lived in a shelter. She is employed full-time at an Orange County company.
In addition to finding permanent housing for underprivileged families, Caterina's Club, feeds some 5,000 children daily with more million than 3 million meals served so far. In addition, his Hospitality Program seeks to divert at-risk high school students by introducing them to opportunities in the food, hospitality and service industries.
For his humanitarian work, Serato has earned international publicity including profiles in People Magazine, CBS, NBC, CNN as well as newspapers and magazines the world over. Among his many honors: CNN Hero, knighted by the Italian government, knighted by the House of Savoy, Ellis Island Medal of Honor, papal blessing from Pope Francis, humanitarian award on the steps of the U.S. Capitol, and numerous proclamations, Man of the Year awards and other forms of recognition -- all of which he accepts to generate public awareness of the needs of our most vulnerable population – our children. For more information, visit www.caterinasclub.org