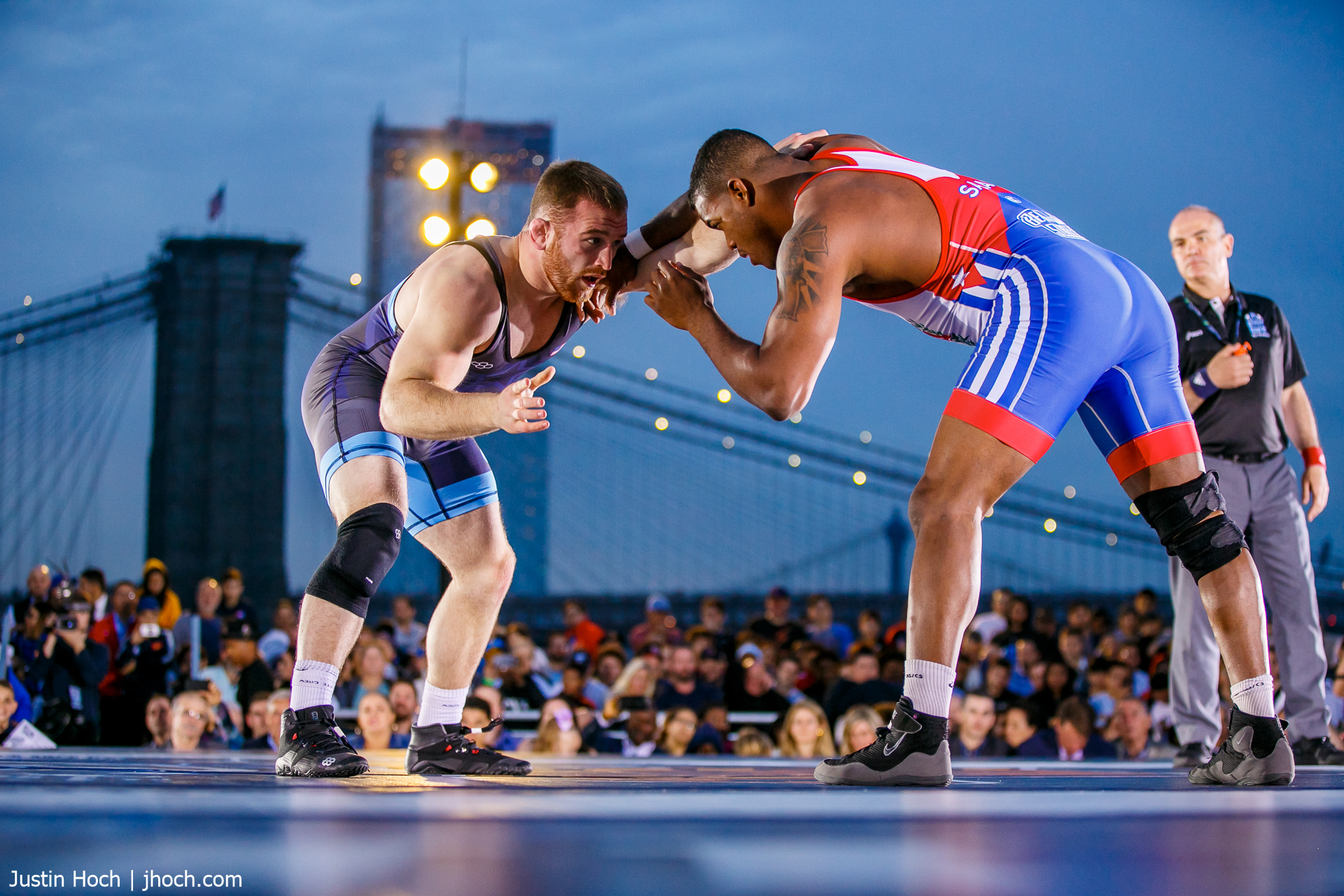 
Kyle Snyder, who won gold at 97 kg the 2016 Olympics in Rio, will battle Canada’s Nishan Randhawa at the “Grapple at the Garden” Beat the Streets (BTS) benefit, May 6 at Hulu Theater at Madison Square Garden. The addition of the superstar and longtime BTS supporter plus a matchup between two-time National Champion Yianni Diakomahlis (Rochester, N.Y.) and Bajrang Punia (India) increases the current number of scheduled matches to eight.
Snyder, of Woodbine, Md., a three-time NCAA Champion at Ohio State, will battle Randhawa at 97 kg. The youngest Olympic gold medalist and youngest world champion in U.S. wrestling history (he was 20 at the time of the Rio victory), Snyder also took gold at the 2015 and 2017 World Championships and silver last year in Budapest. Last month he continued his dominance with a clean sweep at the Dave Kolov International to win gold. Randhawa, from Abbotsford, British Columbia, competes for Simon Fraser Univ. in B.C. and is a Canadian junior and senior freestyle champion.
Diakomahlis completed his second season at Cornell with his second straight national championship at 141 lbs., and now owns a mark of 66-1 with the Big Red, including 47 straight victories. A four-time N.Y. state high school champion at Hilton H.S., Diakomahlis is a two-time Ivy League and EIWA Wrestler of the Year and a unanimous All-Ivy pick.
Bajrang, a frequent medalist in the World Championships, Asian Games, Commonwealth Games and other international championships since 2013, last November achieved the No. 1 ranking in the world at 65kg. Bajrang won five medals in all in 2018, including the historic first gold medal for India in the Asian Games, besting Daichi Takatani of Japan in the final.
“We’re excited to have our most recent Olympic gold medalist and one of our greatest ambassadors back this year,” said Brendan Buckley, Beat the Streets Inc Executive Director. “Kyle Snyder adds to a night that fans have buzzing about for weeks. We can’t wait until May 6 to showcase all this outstanding wrestling talent on the big stage of the Hulu Theater at Madison Square Garden.”
The added matchups boost an already impressive slate that is highlighted by featured bouts between 2012 gold medalist Jordan Burroughs and 2008 Olympian Ben Askren; a match between current NCAA champion Nick Suriano (Paramus, N.J. / Rutgers Univ.) and 2018 World bronze medalist Joe Colon (Clear Lake, Iowa / Univ. of Northern Iowa); women’s bouts between 2018 World Silver Medalist Sarah Hildebrandt (Granger, Ind.) and Canada’s Dana Weicker, and 2018 Senior World Championships Bronze Medalist Mallory Velte (Sacramento, Calif.) vs. Linda Morais, also of Canada; and several other intriguing bouts.
The updated list of matches and weight classes is available below; the order is still to be determined, as are additional matchups. “Grapple at the Garden” supports Beat the Streets (www.btsny.org), the largest grassroots inner city wrestling program in the United States, serving as both a fundraiser for the organization and to celebrate its athletes as they compete on the biggest stage in the center of the world.

Online assignment help by Copycrafter will free you from any academic issues
BuyEssaysCheap.com - affordable writing help
There is no better press release writing company as 123 term papers.