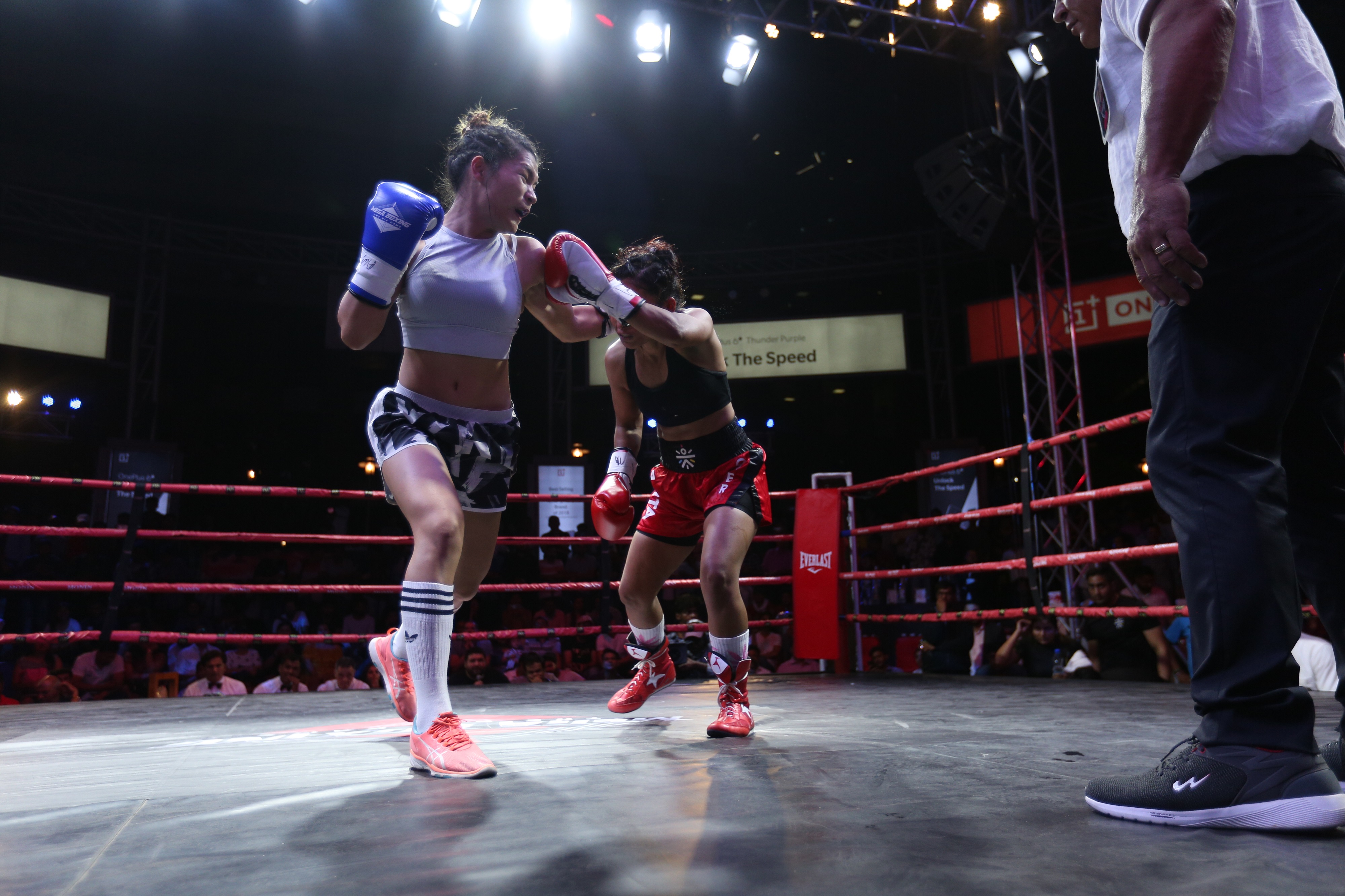 
An astonishing night for the future of professional boxing in India, Mega Boxing, a premium one-day boxing I.P. concluded its first professional boxing fight night for this year at DLF CyberHub yesterday. Brimming with adrenaline, the six fights witnessed knock-outs, rumble, submissions, thrill and even some punches rising towards the sky in excitement.

The CyberHub arena was packed with an enthusiastic and vociferous audience. The show was high on entertainment, with supermodel Lakshmi Rana choreographing the fashion segment, which got a fabulous response from the crowd.

Shedding light on the occasion, Aditya Gulati, Co-Promoter of Mega Boxing said, “It brings us immense happiness to see such a successful show and the appreciation we have received from the audience. They played a major role in making this Show a pride for us and the boxers. The air around the arena was electric, oozing waves of thrill and excitement.”

Boxer Asha Roka commented, “Against Anita, I was expecting to go for high-intensity rounds. In terms of preparation, I didn’t have a specific plan except to make sure I am better than her in every situation. My team and I studied her and worked hard to make it a great fight. I am also thankful to the promoters of Mega Boxing and my coach, for keeping their trust in me even before I stepped into the ring. Nothing brings more joy than when you see these people with hopes and expectations in their eyes for you. Nothing brings more satisfaction than standing up to the expectations of your supporters.

Sagar Narwat, after winning his bout said, “I go and take workshops for young kids and adults to teach them the importance of a disciplined mind for a sport like boxing. I use discipline as part of my life and will use it to help other people. It is incredible to see what you can do when your state of mind is so strong. The sheer amount of love, acknowledgement and appreciation that I have received from the people is tremendous and overwhelmingly motivating. It has not only uplifted my spirit but has made me more focussed towards my ultimate goal. I know exactly where I want to be in this sport and have plans to challenge for a world title fight one day. In the next few months, I’d be able to take on some top-level fighters, including International fighters, for sure. I know how good I am as a fighter and I now believe it; I mentally believe it.”

The audience could feel the intensity of the bouts and were in high spirits throughout the evening. It was enticing to see how all eyes were hooked towards the ring, and everyone was shouting the name of their favourite Boxer with expectations of them winning their fight. This Show witnessed more people immersing themselves in the thrill of boxing, to sum up the evening. The key takeaway from the evening is that people want to see good fights, get entertained. Professional boxing has arrived for good and has a very bright future in India!

· The first fight between Munish and Gaurav was a 4 rounder, ending with Munish knocking out his opponent in the 3rd round and going home with the win

· The second fight between Urvashi and Kirti resulted in a close fight with the scorecard of 56-58 / 56-58 / 56-58 respectively, with Kirti winning the match

· The fourth fight between newbie Arjun Singh and veteran Vikas Singh was a rematch that Arjun had requested after his previous loss to Vikas last year. Once again, this year Vikas proved his worth by taking Arjun down in the ring and winning with a swooping score of 59-55 / 58-56 / 59-55.

· The most awaited fight between India’s much loved professional boxer Rajesh Kumar or Lukka and Tanzania’s Adam Hatibu was as power packed as one could hope. It was a close fight with Rajesh beating Hatibu 100-90 / 100-90 / 99-91, in what was a spectacular bout.

There is no better press release writing company as 123 term papers.
BuyEssaysCheap.com - affordable writing help
Buy 100% high-quality replica watches with a 2-year warranty and free ground shipping!
Online assignment help by Copycrafter will free you from any academic issues