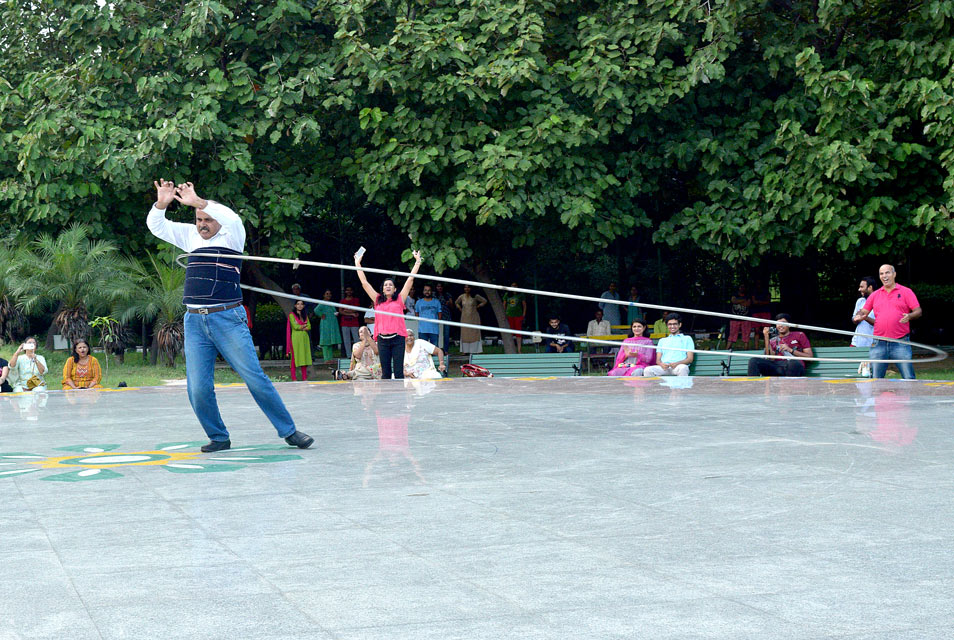 Indian father-son duo, Krishan Bhatia, 51 and Kshitij Bhatia, 16 have broken Guinness World Record for the Largest Hula Hoop Spun; twirling a giant hula hoop measuring 5.31 meters (17 ft. 4 inches). This record was previously held by Yuya Yamada of Japan, who spinned a hula hoop of size 16 ft 10 inches.
Krishan Bhatia is an IES officer working with Indian Railways, and Kshitij Bhatia is a student of class 11th in DAV School, Sector 56, Noida. The event was held at Meghdootam Park, Noida.
Mr Bhatia had first approached Limca Book of Records last year in July, with a proposal to spin a giant hula hoop, which declined to entertain their application stating that they accept proposals only between January and June. “Then we thought of attempting Guinness World Record” told Mr. Bhatia. “The rejection served as a blessing in disguise”, adds Kshitij Bhatia.
"The inspiration to attempt this record came from my daughter, Prachi Bhatia" recalls Mr. Bhatia. Prachi has been hula hooping as a hobby, and now has a startup named Nakshatra Hula Hoops. She also designed the giant hula hoop for the father-son duo, which weighs about 8.5 kgs.
It took us 5 months of practice to break this record. First, we started with a hula hoop of 10 feet; then we kept on adding segments to increase dia to eleven, twelve, thirteen feet... and so on. After we reached 15 feet, it was really challenging to increase even an inch further. But the persistent effort eventually paid off!
Interestingly, the previous Japanese record holder is again trying to capture this record, and Japanese media NHK is filming his efforts. NHK media also interviewed Krishan Bhatia and Kshitij Bhatia for their upcoming TV programme "World Champions".
They are also being approached by various international media agencies from across the world for usage of video rights of their record attempt!