Dakotas to have their first Hindu temple soon 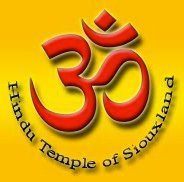 
A Hindu temple is planned to open soon in the Tea suburb of South Dakota’s largest city Sioux Falls, which is claimed to be the “first Hindu temple in the Dakotas”.

North Dakota and South Dakota, states in the Great Plains region of USA, are spread out in about 147,814 square miles area. There is a considerable growth of Hindu populations in the Dakotas.

Hindu Temple of Siouxland (HTOS) was earlier scheduled to open on August 26, but now the Prana Pratishtha grand opening and Murties Sthapana ceremonies have been delayed, with the reason given as: “due to the unexpected amount of rain this spring and summer, the land area around the building has been waterlogged, leading to delays in the construction”. Revised opening date will be available soon as construction is said to be very close to completion.

Ancient Hindu rituals will form part of opening ceremonies; which will reportedly include prayers chanting, offering of flowers, bhajans, liturgical dance, aarti, etc. Cost estimates for the two phases of the temple are listed as $585,000. Bhoomi Pooja of the temple site was held in 2016.

Rajan Zed, who is President of Universal Society of Hinduism, further said that it was important to pass on Hindu spirituality, concepts and traditions to coming generations amidst so many distractions in the consumerist society and hoped that this temple would help in this direction. Zed stressed that instead of running after materialism; we should focus on inner search and realization of Self and work towards achieving moksh (liberation), which was the goal of Hinduism.

“Mission and Objectives” of HTOS in southwest of Sioux Falls include: “Practice ideals of Hinduism through worship, education, and community involvement”. It is seeking donations and plans to celebrate Hindu festival of lights Diwali on November 10. Archana Chatterjee and Muthukumarappan are Trustees Chair and Vice Chair, while Ramesh Singh and Kalyan Boinapalli are President and Vice President respectively.

Hinduism, oldest and third largest religion of the world has about 1.1 billion adherents. There are about three million Hindus in USA.

Tea, incorporated in 1906 and whose tagline is “a growing tradition”, celebrates “Teapot Days” every June, which included “Crowning of Ma & Pa Teapot”. John Lawler is the Mayor.