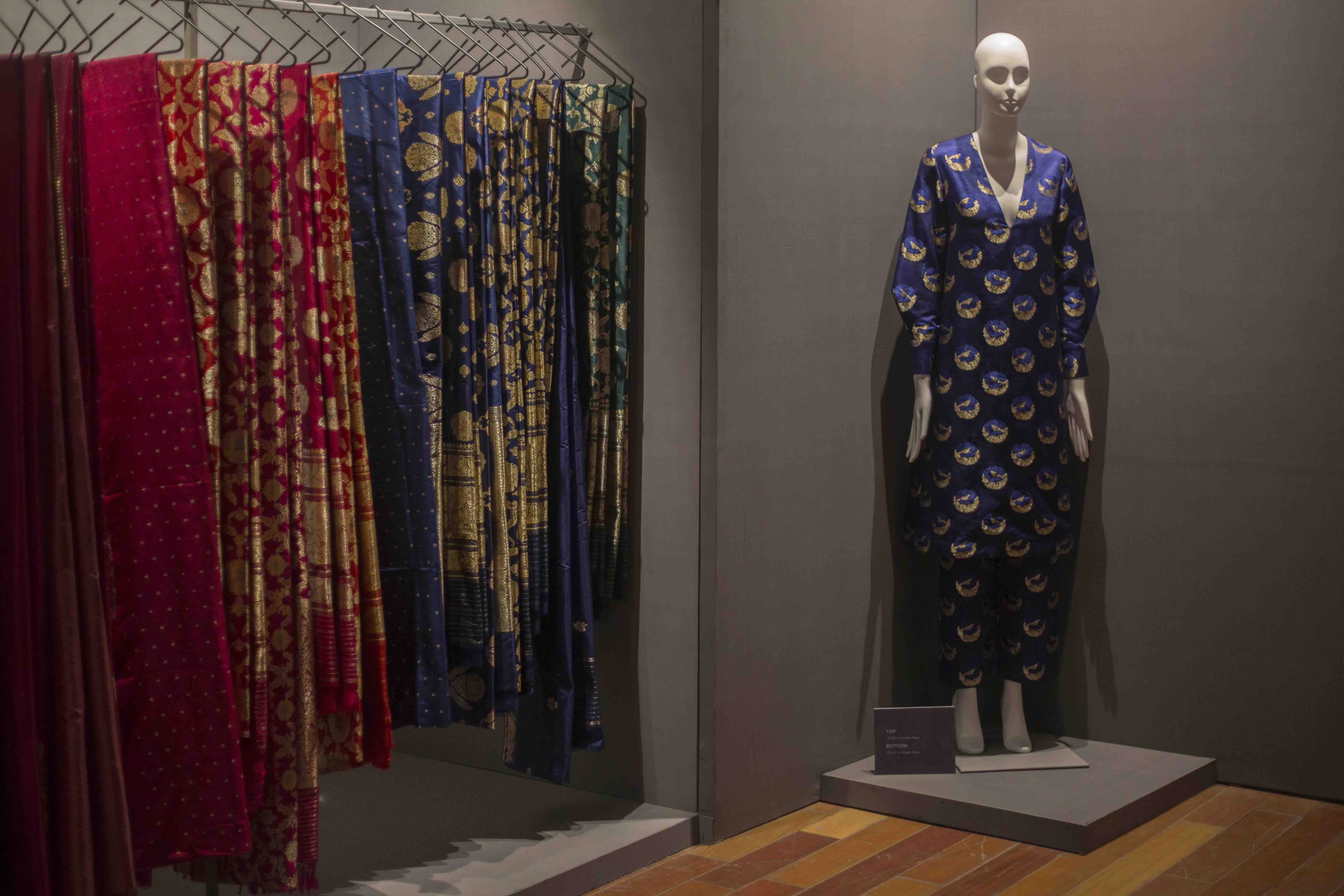 
New Delhi, July 31, 2018: The indigenous textile designer Kshitij Jalori launched his label – KSHITIJ JALORI, with the mounting of a solo exhibition celebrating the magnificence of Indian weaves and revival of traditional craftsmanship. The show was an endeavor to showcase the statement iconic Benarasi textiles with an incrementalist reductionist approach. The evening witnessed the first ever collections launched by the designer encompassing opulent yet distinctive design aesthetics of the brand at the eminent Bikaner House in New Delhi on July 27, 2018. The exhibition was open for public from July 28th – 29th, 2018.

The designer worked with Indian Textiles, beginning with the Benares Sector, and aimed at delivering a global vision and appeal to Indian Textiles by converting these into beautifully stitched modern silhouettes and ensembles. Each piece possessed minimal trims, clean aesthetics and are very comfortable to wear with well worked out details such as pockets and sleeves. The idea was to transform the timeless traditional handloom textiles into sophisticated, modern outfits while taking cues from our rich cultural heritage and making it more appealing to the millennial.

The two-day exhibition highlighted three collections - Coromandel Colony, Pakhi Badi and Gul Bulbul. Each collection paid tribute to the ancient traditional textiles and presented them in new, eclectic ways. Sprawling over 2500 Sq. Ft. with 28 displays set in a plain grey background, the designer extended an experiential appeal to the viewers. The subtle grey background was inspired by the textiles the designer showcased at the exhibit to recreate the look and feel of a museum. The lighting was done in such a way that the entire focus goes only on the textile/ garments. The area had been curated tastefully that totally drew people into a world disconnected from the outside world.

In the collection titled Coromandel Colony, Kshitij has used a variety of fabrics like plain weaves, Kadwa and Phekwa techniques with a gentle use of Mashru. The collection titled Gul Bulbul incorporates luxurious fabrics like satins and tanchois in addition to the above fabrics. His collection titled Pakhi Badi primarily consists of heirloom sarees that also revolve around plain weaves and kadwa techniques. With each collection, the designer tried to incorporate a new texture of fabric, while also developing “Pashmina Brocade” – a fabric where fine cashmere yarns have been woven with silk and zari to develop a fabric which has a soft, smooth texture and drape. This use of Pashmina was the highlight of the exhibition.

The collections incorporate clean and minimalist silhouettes. The designer has emphasized on the form and functionality while developing the garments. He has used brass hooks instead of gundi buttons for ease and wearability. The clothing has been constructed essentially keeping in mind the user-centric point of view.

The collection comprises of functional separates including scarves, jackets, dresses, overcoats, pantsuits and multi-functional kurtas that can be teamed up with pants or simply be worn as dresses along with the exquisite range of sarees and dupattas from Kshitij Jalori’s Classic Range, which come packaged in a vintage trunk which has been developed in collaboration with CORD. The designer has created cohesive looks with each garment with customized shoes elegantly created in pure leather matching the aesthetics of the ensembles. They gave a regal appeal yet are extremely comfortable to wear. Talking about the colour palette, Coromandel Colony has been inspired by the Chintz artworks, so the collection has been designed in the shades of mustard, onion pink, charcoal, while Gul Bulbul has been developed in shades of old rose, indigos, earth grey and pale blue owing to its Persian influence. The collection titled Pakhi Badi stays true to the romantic pastel hues that remind us of the old world charm.

Quote by the designer Kshitij Jalori, “I feel happy that I have been able to pull it off. People really admired everything that I tried to put together – the clothes, the fabrics, the shoes, the sarees, the packaging and the setting. I am happy to see that people liked the way the looks were curated with just a simple grey background with the entire focus of the garments itself. The construction of the garments was also well received. All in all, it went well and I am very happy with the response”.