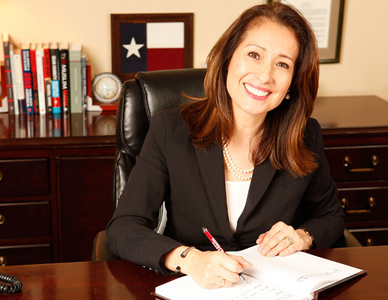 Americans for Legal Immigration PAC (ALIPAC) is endorsing Maria Espinoza for Congress today in her bid to replace illegal immigrant amnesty supporter Rep. John Culberson (R-TX) in the GOP primary of 2016 in the 7th Congressional District of Texas.

Maria Espinoza is the National Director of the Remembrance Project, which raises public awareness of the many Americans killed each year by illegal immigrants. These thousands of deaths each year occur due to the political sabotage of our nation's border and immigration laws. Maria's national leadership efforts against illegal immigration and any form of amnesty for illegals has earned her a great deal of respect from many leaders and activists in the national movement to secure America's borders.

Culberson was added to the list because he voted for the Ryan/Obama Omnibus funding bill that funded Obama's unconstitutional amnesty orders which Texas and 25 other states are suing to stop, illegal alien sanctuary cities like Houston and San Francisco, and Obama's dangerous Syrian refugee and border surge illegal immigrant resettlement programs.

Congressman John Culberson's vote for the omnibus spending bill also supported a sneaky amendment that quadruples the number of unskilled workers allowed to immigrate to America each year while denying funding for the promised 700 miles of improved border walls and fencing!

"John Culberson will be thrown out of Congress in a landslide like Eric Cantor if Maria Espinoza can raise enough funds and volunteers to inform enough Republican voters in her district of Culberson's vote for amnesty for illegals, increased legal immigration, and Obama's unpopular amnesty and resettlement programs," said William Gheen, President of ALIPAC. "Maria Espinoza has been a champion for the families that have lost loved ones to the illegal alien invasion of America supported by politicians like Obama, Ryan, Boehner, and Culberson. Our organization stands ready to help her, and others like her, any way we can!"

Houston, Texas, is in the 7th Congressional District and is one of ALIPAC's largest bases of support. ALIPAC's President William Gheen is heard frequently on the Houston radio station KTRH, and he made the "Revolution Now America" speech to over 15,000 people in the Sam Houston Speedway Tea Party event of April 15, 2010. (Click here to view: https://www.youtube.com/watch?v=V8YI4WquWhA)

ALIPAC is calling for candidates like Maria Espinoza who support America's existing border and immigration laws, instead of any form of amnesty that would further compromise our laws, to step forward to challenge all GOP incumbents on the Cantor List.

ALIPAC is calling for voters in the 7th Congressional District to support Maria Espinoza, and for volunteers and donors from across America to converge and focus their support on electing Maria Espinoza for Congress 2016! (Click here to visit her site: http://www.mariaforamerica.com)

For more information or to schedule interviews, visit http://www.alipac.us.

Buy 100% high-quality replica watches with a 2-year warranty and free ground shipping!
Go to Assignmentgeek.com and get your homework done.
Hire an expert to write a paper for you at writers per hour.