Inauguration of New Batch of AAFT School of Journalism 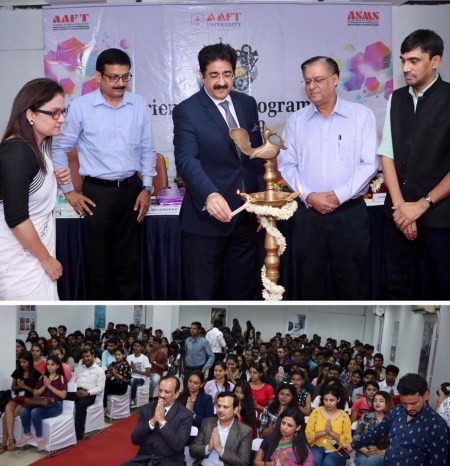 
Noida: AAFT School of Journalism celebrated the opening of new batch of 2019-20 at their new campus at Noida in the presence of large young media persons.

“We are twenty six years old institution. Proudly I can say that AAFT has given some of the finest journalists to the Nation. AAFT School of Journalism is best in the country with extra ordinary facilities for the students to enjoy,” initiated Dr. Sandeep Marwah at the inauguration of new batch of AAFT School of Mass Communication and Journalism.

“Journalism is a serious business. Wrong noting can hamper any body’s reputation. You have to have both side views to make a complete report. Best of the news can be dropped if research work is not done properly,” said Narendra Kumar Editor Veer Arjun one of the oldest newspapers of India, which has given many politicians including former Prime Minister Atal Bihari Vajapaye.

“The most important is the urgency of news but before that it is important to check the authenticity of the news. The creditability of journalist and the news paper is at stake every morning. It is not the quantum but the quality which bothers the editor of the News paper,” added Dr. Shiv Kumar Rai Founder of Fouth Point Media Network, Editor In Chief of Magazine The Point and President of social organization Meri Jati Bhartiya.

“Time has come when you have to be different from rest of the World. The investigative journalism is one but look for stories that are exclusive. Television needs ample material and there is scope for all those who have passion and can work hard. To create name you have to devote lots of time,” expressed Ashish K Singh of Aaj Tak

Later Dr. Marwah honored and presented the life membership of World Peace Development And Research Foundation to all the dignities. Director of AAFT School of Mass Communication And Journalism Albeena Abbas conducted the program and paid vote of thanks.

There is no better press release writing company as 123 term papers.
BuyEssaysCheap.com - affordable writing help
Go to Assignmentgeek.com and get your homework done.