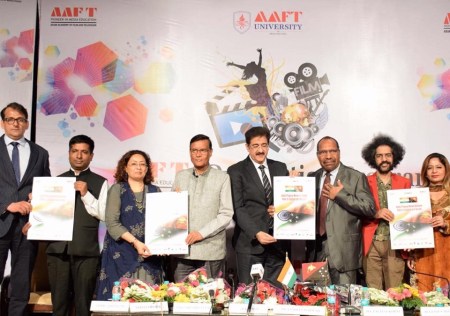 
Noida: It was the joint decision of International Chamber of Media And Entertainment Industry and High Commission of Papua New Guinea to launch a new committee under the name and banner of Indo Papua New Guinea Film And Cultural Forum.

“We are creating a history today by launching the first ever Indo Papua Cultural Forum in last 70 years. Where no one of thought of starting a committee like this ever. ICMEI has many events planned already for this committee and soon we will start operating in this organization,” stated Dr. Sandeep Marwah welcoming the guest from all over India.

“Today is a very auspicious day when India and Papua New Guinea launching another association to built better relations between two countries through art and culture. It is very encouraging to see that so many people especially from media are now interested in knowing about my country,” said H.E. Paulias Korni High Commissioner of Papua New Guinea to India.

A poster was launched to mark the opening of the Indo Papua New Guinea Film And Cultural Forum by the dignities present on the stage.