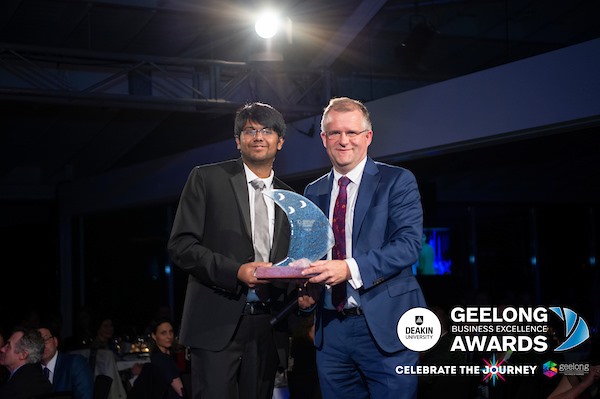 
Indian-Australian Entrepreneur Aamir Qutub has won the Young Entrepreneur of the Year award category in the Business Excellence Awards (GBEA) in Australia.

Established in 1986, and managed by the Geelong Chamber of Commerce, The Business Excellence Awards are the oldest continuously running business awards in Australia. Justin Giddings – CEO of Avalon Airport won the Business Leader of the Year and Aamir Qutub (CEO, Enterprise Monkey) won the Young Entrepreneur of the Year Award. “With a record number of entrants participating in the Geelong Business Excellence Awards, and going through a stringent judging process, the Awards are now more competitive than ever. Ask any of the winners, they’re absolutely worth winning” says Ben Flynn, CEO Geelong Chamber of Commerce.

Aamir is the founder & CEO of Enterprise Monkey (a digital solutions agency), Tech Investor and Co-Founder in 6 startups. Aamir is also the member of Ministerial Advisory Committee to the Minister for Planning in Australia. Aamir was appointed as the General Manager of ICT Geelong (local IT Industry Cluster) at the age of 25. Aamir was the founding Secretary of Pivot Summit – Australia’s largest regional tech conference.

Aamir was brought up in Aligarh city in Uttar Pradesh. He did his Bachelor of Engineering from Aligarh Muslim University in India and immigrated to Australia at the age of 23 to do his MBA from Deakin University.

“I applied for around 150 office jobs but couldn’t get any due to the lack of Australian experience. I used to work as a cleaner at the Avalon Airport and distribute newspapers in the midnight to pay for my living and fees.” Aamir says.
In 2012, Aamir got an internship opportunity with ICT Geelong. Impressed with Aamir’s exceptional performance and passion for digital transformation, he was asked by the board to step up as the General Manager of ICT Geelong at the age of 25.

Prior to that Aamir was elected as Gen. Secretary of AMU Students’ Union 2011 (India). As Secretary, Aamir organized the first-ever recruitment drive in AMU which resulted in the placement of 2000 students in 30 companies. His passion towards technology contributed in the digitization of AMU campus by the introduction of free WiFi and Smart Classrooms. He also developed strong bureaucratic and political connections which empowered him to lobby some National Policies for the welfare of Students.

In 2014, Aamir founded Enterprise Monkey – a web & app solutions company in brother in law’s garage in 2014. “I started with $2000 in savings,” says Aamir who led his company to establish in 4 countries with YoY revenue growth of 300% in first 3 years.

Enterprise Monkey has established itself as a leader in web and app space and now growing it’s leadership in Artificial Intelligence, Augmented Reality and Internet of Things space. The client list includes NASDAQ listed companies as well as seed stage startups.

Buy 100% high-quality replica watches with a 2-year warranty and free ground shipping!
On-demand assignment help - find an assignment experts in 3 steps.
Online assignment help by Copycrafter will free you from any academic issues