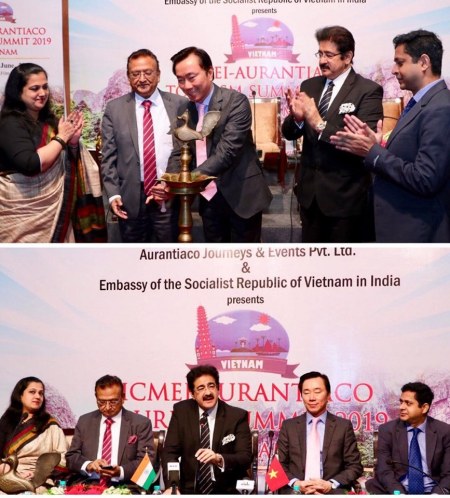 
Noida: IVFCF- Indo Vietnam Film And Cultural Forum of ICMEI- International Chamber of Media And Entertainment Industry organized a powerful workshop and roadshow on the tourism of Vietnam recently at Marwah Studios.

Speaking at the event, H.E. Pham Sanh Chau Ambassador of Vietnam to India and Patron to Indo Vietnam Cultural Forum recalled the long-standing history and cultural ties between Vietnam and India, including Buddhism and yoga.

Subhash Goyal, Chairman of the STIC Travel Group of Companies, lauded Vietnam as one of the world’s most beautiful countries and one of the top five emerging destinations with special cuisine and culture, vibrant business and hospitable people. He said the potential of tourism links between the two nations remains huge

The event was co-organized by the Embassy of Vietnam in India, AAFT University and Aurantiaco an event management company. Nguyen Le Thanh Deputy Chief of the Mission, Pham Tri Dung First Secretary Economic Section, Ho Thi Van First Secretary Head of the information and media section and Pruthi Ranjan of Victoria Tours were also present there.