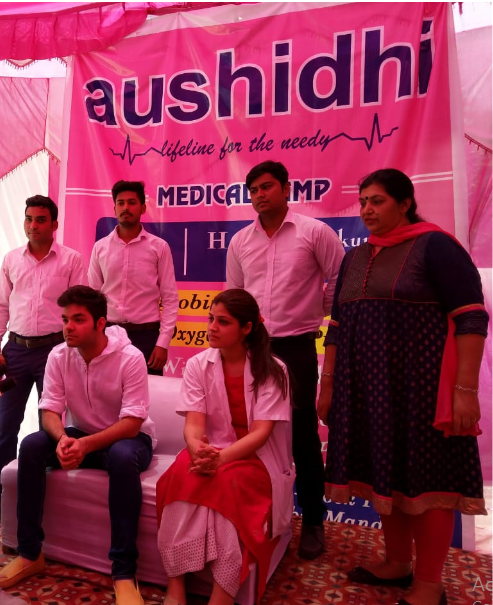 
Access to essential medicines is a silent crisis in India. As per a Lancet report, 2.4 million Indians die of treatable conditions every year, the worst situation among other nations. In a bid to safeguard the health and lives of low-income and economically vulnerable groups, Aushidhi organized a free health camp and distributed free medicines between 10am to 2pm today at B-Block Park, Phase -2, Manglapuri, West Delhi.

Aushidhi is a pioneer in providing free medicines and health check-ups to the deprived ones who require it the most but cannot afford it. It is an online platform which bridges the gap between free medicine provider and people who seek medicines. Aushidhi is led by a 17 year old, class 12th student of Delhi Public School, RK Puram, Vishad Khanna, who has been zealously working towards providing free of cost medicines to the underprivileged section of the society.

The medical camp offered tests such as pulse oximetry, haemoglobin, blood pressure and blood sugar, free of cost. Aushidhi has been conducting such camps on a regular basis. Led by Mr. Vishad Khanna, Aushidhi aims to supply free medicine in rural and urban India by creating a chain of Medical units that will collect and distribute free medicines to needy people. Many studies have claimed that there is a lack of accessibility to affordable and essential medicines in the country. India is still not able to curb the prevailing mortality rate due to the scantiness of medical care. This visionary leader is a student of Computer Science and has developed a portal which connects the needy and poor patients with Donors like Company / Pharmacy / Doctor.

Speaking about the camp, Vishad Khanna, Founder of Aushidhi, said, “The economically weaker section don’t usually visit a doctor for routine assessment, even in the midst of sufferings and ailments and brush aside ‘minor problems’ until illness suddenly strikes them with full force. Besides, even after assessment, not many purchase medicines. The effort, however, proved to be a stitch in time as scores of people, particularly the needy, got an inkling of their health status and medicines which they require. Aushidhi has been consistently organizing free camps with an aim to create a better world where poor and needy in rural and urban areas get access to free medicines and thereby uplifting the health standard all over India.”

Recognizing the initiative, Pravesh Sahib Singh, Member of Parliament from West Delhi Lok Sabha Constituency, said “I place my appreciation on record that Aushidhi is pursuing a noble cause and I am will go a long way in serving the masses.“