113th Batch of AAFT Inaugurated with Pomp and Show 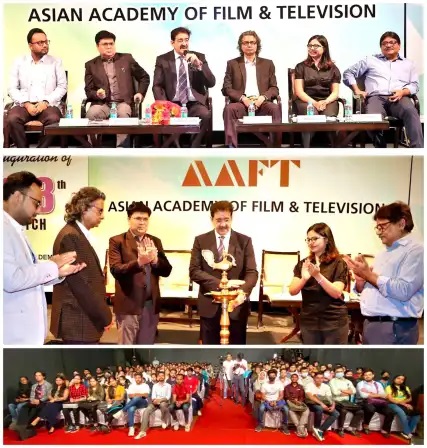 
Noida: “We are breaking our own record Today. AAFT is the only creative institute which has touched 113th batch of training. I am sure this is going to be another lucky batch which will touch the heights of success. AAFT has become international brand and people of the creative industry do recognize education at AAFT,” said Dr. Sandeep Marwah President of Asian Academy of Film and Television while lighting the ceremonial lamp at the inauguration of 113th batch.

The batch has been very well planned and you will get ample to learn and golden opportunity to do loads of practical in your respective disciplines. The students will also get involved with large number of workshops, interactions, seminars and forthcoming Documentary Film Festival, International Festival of Cellphone Cinema, and foreign films festival in the coming weeks informed Dr. Sandeep Marwah.

What we aspect from student to be punctual, regular, and sincere towards his or her own courses. There is lot to learn from AAFT. I extend my heartiest congratulations to every student for being part of AAFT. I wish you a very comfortable stay at AAFT expressed Dr. Marwah during his introductory speech.

The directors, dean and faculty were also present during the opening session of 113th batch. The event was supported by International Chamber of Media and Entertainment Industry, Asian Unity Alliance, Koshish-Sahyog, World Peace Development and Research Foundation.