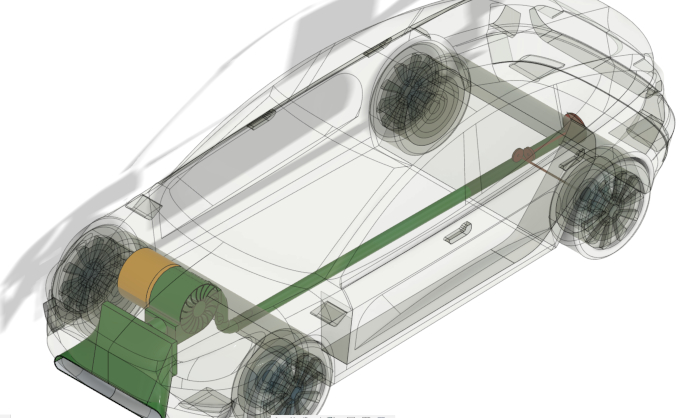 
Maidenhead, England, Jan 6, 2021 -- After being furloughed from his job in March Keith Chester wanted to do his bit in helping to reduce our generation's consumption of power to alleviate global warming for the sake of his 3 sons. He had an initial idea for harnessing all types of weather including rainfall in a new home power system, which then led him to another: what if we could harness the airflow around a vehicle to generate onboard power as the vehicle travels? He did a great deal of research into this including a search of current patents to assess whether this could be viable. He found that several patents had previously been filed but that none had been adopted. They had been dismissed by physicists as energy could not be obtained “for free” and that the negative forces from the resistance of new inlets or added wind turbines would cancel the gains. Rather than stopping at this point, he decided to dig deeper, researching the principles of Physics, Electromagnetic induction, fluid dynamics and obscure systems used in fighter aircraft of the 40s and 50s. He discovered that a British engineer, F.W. Meredith, had developed a system to create a propulsive force that reduced drag from air inlets used for radiator cooling, to increase the efficiency of piston engined aircraft. This system has subsequently been used in Formula 1.

Keith realised that all vehicles, both electric and combustion, already divert a large area of airflow from the front of the vehicle to be passed through the radiator, and that this then exits to the engine bay where consequently it is wasted. As the air passes through the radiator heat is added which expands it. If enclosed in ducting then this forces the air to accelerate adding more energy and, if this airflow is then passed through an enclosed air turbine, then the force of the airflow is extracted and transformed into rotation. Additionally to this, if an impeller (extraction fan) is added behind the turbine then this will pull the air through the system, lowering the pressure behind the turbine and dramatically increasing its power output. The lightweight low inertia impeller would be turned by a coupling to the axle or driveshaft which is being rotated with 2000kg of weight behind it.

Keith could see no flaws in the principles he envisioned and so set about learning 3d design software and 3d printing, and then built several prototypes. He discovered that the addition of the heat energy does indeed increase power, starting at around a 30 degrees C differential to ambient, increasing substantially for each 10 degree rise after. He tested over 25 different blade designs and inlet/ outlet positions for the turbine and found an optimised approach that had highly efficient airflow power extraction. He then found online CFD (fluid dynamics) simulation software and ran his designs through this to confirm the potential power. He also researched the various physics formulae to calculate the power that could be gained, identifying the potential for 11kW at 70 mph for each hour of travel.

Given that battery systems are currently around 100kW giving about 350 miles of range, then the system could deliver a 55% increase to that base range over 5 hours if travelling at 70mph for 350 miles. On top of this that extra range ALSO generates extra power, as does the extra extra range and so on, giving around a 125% total increase to the base range of the vehicle. Finally, as battery technology improves and the base range is increased as a result, the system will continue to create yet more power in correlation with that increased range such that it never becomes obsolete. Instead its effect is increased ie a larger amount of extra miles will be produced.

Keith has filed a UK patent to be followed up worldwide and is approaching car manufacturers to assess their interest in further developing and adopting the system. Alternatively, he is considering developing a company supported by the Government and Venture Capital to develop and manufacture systems for the most popular car models, in the UK. These will be offered direct to EV car owners and he invites approaches from Venture Capitalists inspired by the idea. The equipment would be supplied to a network of local garages for fitting, supported by appropriate instruction manuals and training. This latter approach is designed to assist in creating jobs and an export industry, which we will need now that Brexit is here. Obviously with millions of EVs now being produced worldwide and growing, there is a huge market.

By adoption of the system it is hoped that the obsolescence of the combustion engine is accelerated, reducing Global Warming and removing pollution from the lungs of our children. Interested parties can reach the inventor at keithchester1@gmail.com.