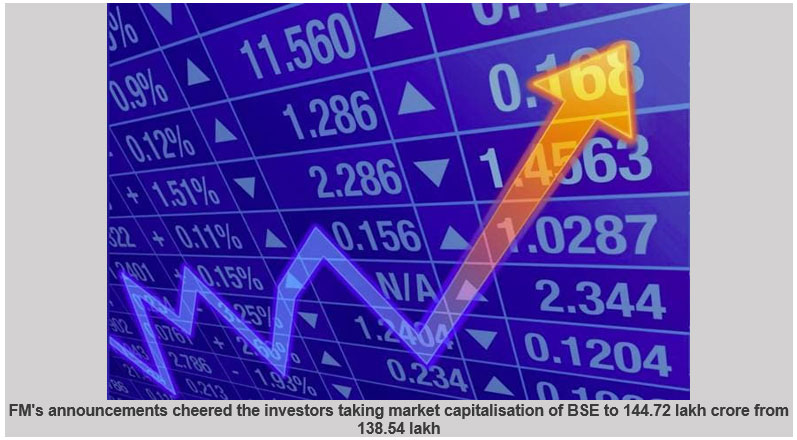 
FM’s announcements cheered the investors taking market capitalisation of BSE to 144.72 lakh crore from 138.54 lakh crore on Thursday, a gain of 5.28% or Rs 7.31 lakh crore within minutes

Nirmala Sitharaman on Friday answered the long-standing demand of the corporate sector to reduce tax on domestic firms, pushing the stock market to the day’s high of 38,239, up 2,146 points or up 5.95 per cent. Earlier in the day, market opened flat with Sensex trading 75 points higher at 36,170. FM’s announcements cheered the investors taking market capitalisation of BSE to 144.72 lakh crore from 138.54 lakh crore on Thursday, a gain of 5.28% or Rs 7.31 lakh crore within minutes.

The Finance Minister announced the reduction in corporate tax to 25.17 per cent, inclusive of surcharge and cess, for domestic companies. FM also added that new domestic company incorporated on or after 1st October 2019 making fresh investment in manufacturing will have an option to pay income-tax at an effective rate of 17%. The announcements are expected to give a major boost to the economy and will create a surplus in the hands of corporate, easing liquidity concerns and allowing them to make fresh new investments. The revenue foregone by government on reduction in corporate tax and other relief measures will be Rs 1.45 lakh crore annually. This, FM said, will be used to promote investment and growth.

Earlier, FM Sitharaman also announced that the government will not levy enhanced surcharge introduced in Budget on capital gain arising from the sale of equity shares in a company liable for securities transaction tax (STT). The super-rich tax will also not apply on capital gains arising from the sale of any security including derivatives in hands of foreign portfolio investors (FPIs). Minister also provided relief to the markets by announcing that the listed companies which have announced a buyback of shares before July 5, will not be charged with super-rich tax.

FM also said that companies will now be allowed to use their 2 per cent CSR spend on incubation, IITs, NITs, and national laboratories.

Buy 100% high-quality replica watches with a 2-year warranty and free ground shipping!
Go to Assignmentgeek.com and get your homework done.
There is no better press release writing company as 123 term papers.
BuyEssaysCheap.com - affordable writing help
Online assignment help by Copycrafter will free you from any academic issues