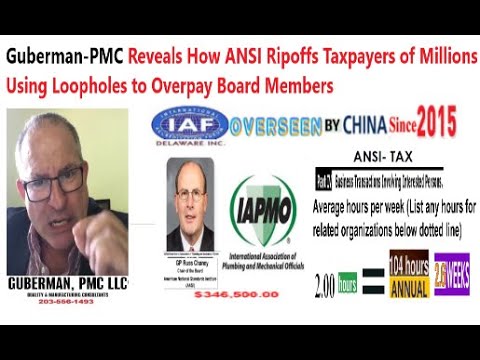 
ANSI drops to new low insulting normal working people and those who love America, by paying Board Members outrageous amounts of money for next to no work.

New York, NY - USA, September 9, 2019 -- It is an unarguable fact that quality certification association ANSI’s board members make jaw-dropping amounts of money, that they don’t even pay taxes on, working just two hours a week. The association has tried to keep this concealed but Quality Expert Daryl Guberman has done his utmost to raise awareness of these troubling facts. Using YouTube as a platform to continue to break down the long list of issues with ANSI, and why the association is very likely not just unethical when it comes to finances but also a national security threat, Guberman is doing his best to make quality registrars trustworthy again. Guberman’s new video, “How ANSI Ripoffs Taxpayers To Pay Board Members Millions” backs up all these assertions with facts that can be easily confirmed.

“A look at the tax reports for 2016 shows how ANSI gives their board members royalty payments, which are not taxable and amounting to many hundreds of thousands of dollars each for only two hours of work a week,” remarked Guberman. “This is enough to make a person’s skin crawl who cares about America and the quality standards and companies are held to. We can only guess why they aren’t being investigated.”

ANSI are so arrogant people in their inner circle have even openly called the royalty payments they give themselves as “money laundering”. As disturbing as this already is, Guberman also reminds viewers of the new video how deeply entwined ANSI is with China, and a long list of other openly anti-American states and nationals.

Guberman, founder and CEO of Quality Certification experts Guberman-PMC, is the complete opposite of ANSI and related efforts like ANAB anf the IAF. Guberman is a proud Jewish-American who supports the President in the need to Make America Great Again and recognizes working with countries who oppose Israel is also a terrible idea for American patriots. Guberman has led, and will continue to lead, the campaign to educate which Quality Registrars can be trusted and which should be avoided.

Expect the videos from Guberman and Guberman-PMC to stay on schedule as he shares his voice and experience in the field of Quality to a growing audience. Anyone with question or questions, or who would like to bring Guberman-PMC on board for Quality Consulting, is encouraged to contact the firm at any time.

Online assignment help by Copycrafter will free you from any academic issues
Go to Assignmentgeek.com and get your homework done.
Buy 100% high-quality replica watches with a 2-year warranty and free ground shipping!