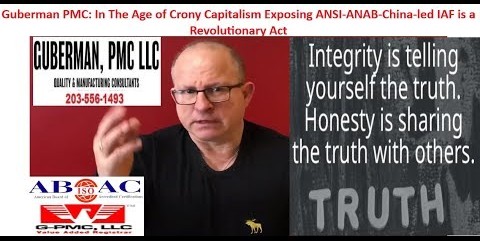 
The number of companies, including military contractors, being overseen by a Chinese national led quality registrar is growing and beyond disturbing. Daryl Guberman, an authority in the quality space, has gone to YouTube to bring to call for a boycott and end the hypocrisy.

New York, NY - USA, May 20, 2019 -- When a company submits to a quality association to be certified they open the door to their inside information being made vulnerable to the association inspecting them. When American companies allow this to happen at the hands of a Chinese-national led group of associations like the ANSI-ANAB and the IAF, supposed leaders for quality accreditation, it can be disconcerting to say the least. When that is coupled with these associations not even doing their quality jobs properly, a fact proven by all of the recent failures experienced by companies under they watch, the whole situation is likely criminal. Quality Consultant firm CEO Daryl Guberman of Guberman-PMC has had more than enough and is now calling for a complete boycott of companies involved, explaining the reason why in his new YouTube tell-all video, “Overseen By China: Message To All Patriots To Boycott Anti-American Companies”. The initial response to the video has been both shocked and extremely positive.

“Sometimes we have to just say enough is enough and that is the point we have reached with the Chinese-control over these supposedly American-based Quality Certification Associations,” commented Guberman. “So by making a list of all of the companies involved and offering it for free to anyone who contacts us, so that they can be boycotted, is the next logical step in trying to exert positive influence.”

Gubermian has a deep knowledge of the world of quality having worked in it for over three decades and being the founder and CEO of quality consultants Guberman-PMC a well-respected member of the quality community. He is also an American patriot who does his best to hire veterans to thank them for their service, and proudly also a Jewish supporter of the only democracy in the middle east and reliable American-ally Israel. This makes the fact that the Chinese overseen quality associations have over two dozen anti-Israel nations as members, but Israel itself is never asked to join, even more offensive and sinister.

Be sure to keep an eye out for new videos from Guberman on the subject that appear on a regular basis.

There is no better press release writing company as 123 term papers.
On-demand assignment help - find an assignment experts in 3 steps.
Buy 100% high-quality replica watches with a 2-year warranty and free ground shipping!
Online assignment help by Copycrafter will free you from any academic issues