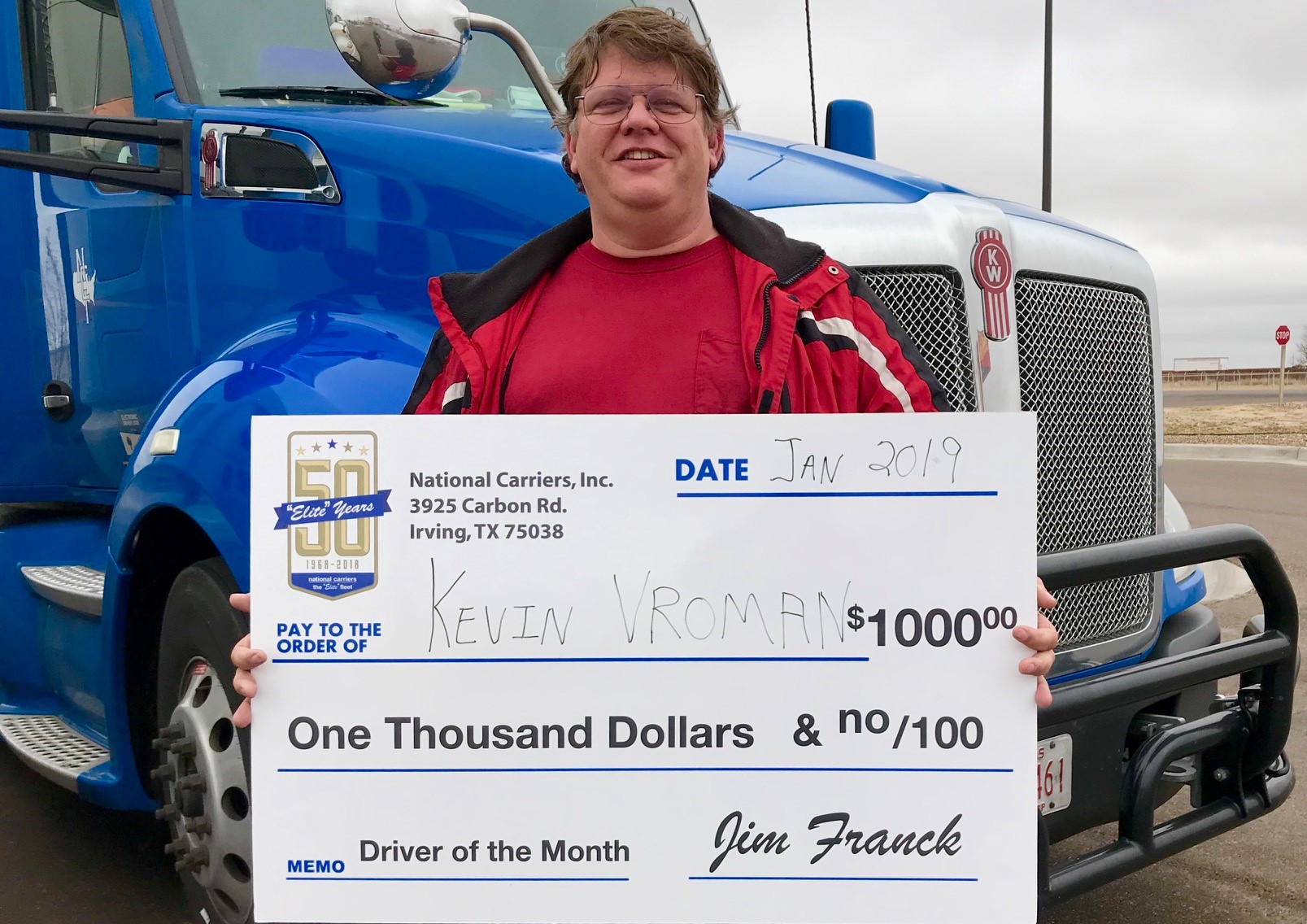 
National Carriers is pleased to announce Kevin Vroman has been named Driver of the Month for January 2019. After joining National Carriers, he quickly became a leader in productivity and safety. He has taken his years of driving experience and excelled, earning recognition and receiving the NCI President’s Award of Excellence. This award is given to drivers who are proficient in multiple areas laid out by the company.
Driver manager Jeff Chance said, “Kevin and I started working together in April of 2017. It became apparent he was a hard worker and adept at working smart. He is astute, while aware of where he is and where he is going. He is instinctual in his quick assessment of a variety of situations concerning his current dispatch and preplans. If you have a load that needs someone to run block and tackle on it, Kevin is your person.”
“I have found many positives working at National Carriers. First and foremost, I have never been with a company that reacts as quickly when I have a problem. Whether it is breakdown, safety or dispatch, they respond swiftly. National Carriers equipment is great with over half the trucks being upgraded this year. No truck will be over two years old by the end of 2019. Finally, they have good freight to keep drivers moving,” shared Kevin.
Kevin continued, “I began driving OTR after both my wife and I lost our jobs in 1999. I am the man of the house. I was motivated to earn as much money as I could in the least amount of time. I was driven to provide for my wife and three children. I chose trucking and I’ve never looked back. I have been an owner operator in the past; however, I enjoy driving a company truck. If I have a problem, I call and it is taken care of. I expect to retire from National Carriers.”
In addition to a $1,000 Driver of the Month bonus, Kevin is now a finalist for Driver of the Year and the accompanying $10,000 prize.
Company Information
National Carriers is a diversified motor carrier servicing all 48 states in the continental United States with transportation offerings which include refrigerated, livestock, and logistics services. At National Carriers, our mission is "to be the safest, most customer-focused, and successful motor carrier in our class."
Being part of the Elite Fleet® means enjoying a career worthy of your skills and commitment to excellence. We believe long-term success is waiting for you at National Carriers®, one of the nation's oldest, most respected and largest carriers. Learn about our exciting opportunities for owner operators as well as company drivers. If you are interested in a leasing a truck, National Carriers® Leasing Division is the ideal partner to help you get started.