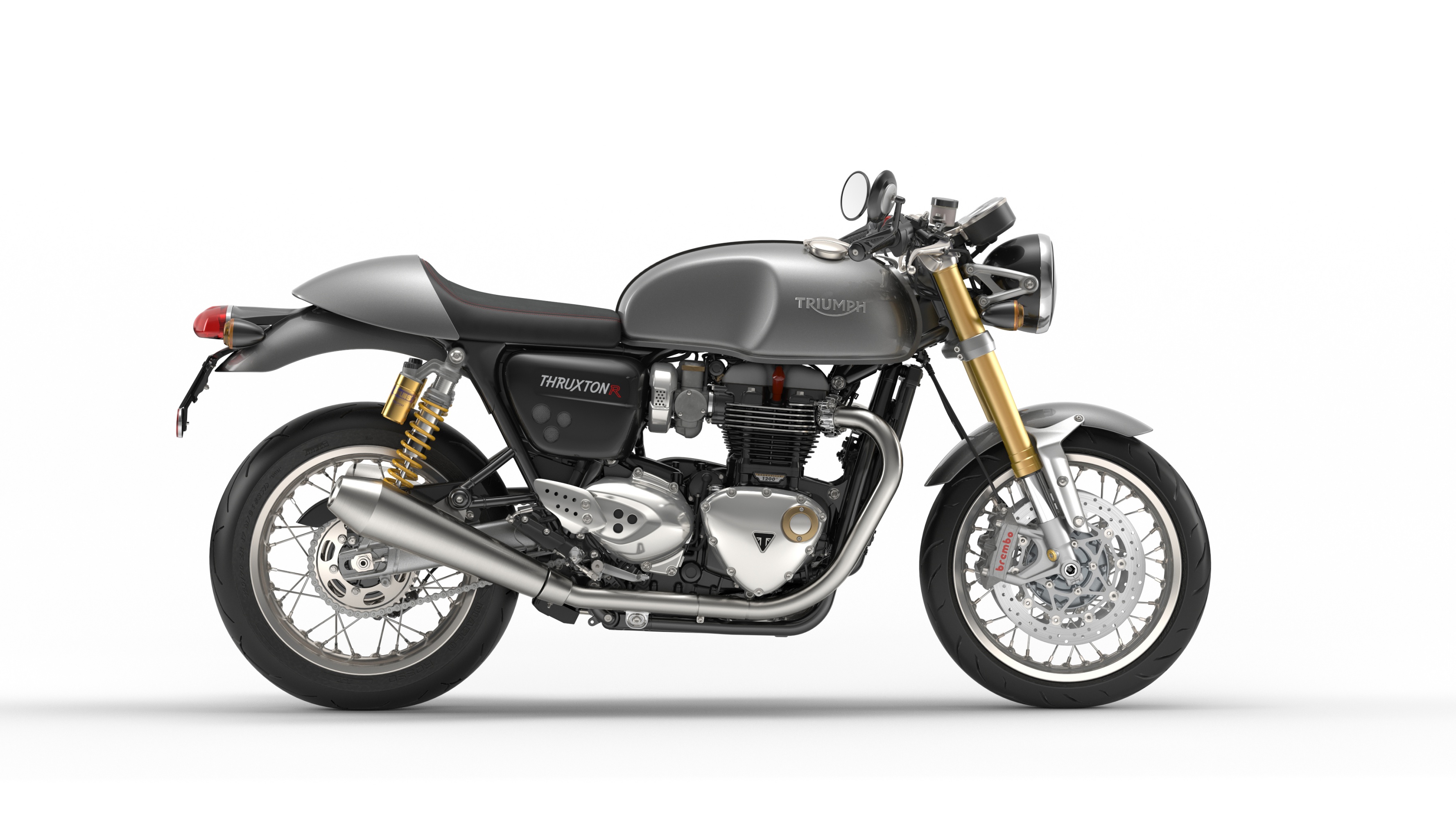 
• Introducing the all-new 1200cc Thruxton R, with beautifully imposing and authentic Triumph modern classic sports styling and all the poise, performance, braking and handling to live up to its legendary name.
• Powered by the game-changing 1200cc ‘high power’ Thruxton spec. engine, with immediate and
exciting power delivery, the instant throttle response of Triumph’s next generation ride-by-wire system and a truly thrilling exhaust note.
• With a dedicated chassis and fully uprated suspension for stunning handling and agility and a higher specification of equipment taking the ride to the next level.
• A striking and imposing evolution of the iconic Thruxton racer with the same ‘flat-on-the-tank’ ethos and streamlined sports silhouette. Crafted with styling cues from classic Thurxton’s of the late ’60s and featuring an incredible level of detailing, including a uniquely beautiful new Monza-style filler cap.
• Named after the legendary 500 mile Thruxton endurance race series and the Triumphs that
dominated it, and which broke the first 100mph lap at the Isle of man TT, the Bonneville ‘Thruxton’
racers inspired a generation of teenage café racers and custom special builders.
• The Thruxton R is one of the three exciting motorcycles in the new Bonneville family available here in India - all with 100% authentic Bonneville character, truly modern capability and performance.
Mumbai, June 3, 2016: Out of all the members of the new Bonneville family, the new Triumph Thruxton R has the most to live up to. Its name is about as legendary as it gets, even for an icon like the Bonneville. Back in the 1960s and ’70s it was synonymous with Triumph’s racing success across the world and most notably at the Isle of Man TT, and it inspired a generation of teenage café racers and custom specials.
The all-new Thruxton R more than just look the part, it really delivers out on the road too. Returning the café racer to its heritage performance roots, with all the power, delivered by its 1200cc ‘Thruxton spec’ engine, and the handling, agility and capability to match its beautifully imposing and authentic styling. It is simply the most thrilling and full-blooded sports classic you can buy here in India. The Thruxton R is equipped with Brembo monobloc callipers, Showa big piston forks, Öhlins rear suspension and Pirelli Diablo Rosso Corsa Tyres.
Vimal Sumbly, Managing Director, Triumph Motorcycles, India, said, “Its uncompromisingly elegant and imposing lines are perfectly matched by the quality of the design, detailing, power and performance, and the incorporation of contemporary technology into a ride that’s as poised as it is exhilarating. This combination
of head-turning style, spine-tingling performance and unparalleled heritage and character is what makes the new Thurxton R the real deal as well as the ultimate modern classic café racers and something which will enthral the riders here in India. The legend is back.”
The new Thruxton R is launched at INR 10,90,000 Ex-showroom Delhi.
The Bonneville range has been the motorcycle of choice by people across the globe from all walks of life; movie stars, musicians and the likes have chosen this motorcycle for its style, spirit and individuality making it the bike to be seen on. Some of the biggest names across the world ride Triumph motorcycles with great pride.
Keeping alive the same tradition here in India, Triumph Motorcycles is proud to have eminent Bollywood actress, social activist & entrepreneur, Gul Panag as a Triumph Motorcycles customer. The well-known rider today added the very recently launched Triumph Bonneville T120 to her bevy of mean machines. Vimal Sumbly, Managing Director, Triumph Motorcycles India formally handed the keys of the new Bonneville T120 to Gul
Panag at a gala event in Mumbai and welcomed her as a proud Triumph Motorcycles customer.
A visibly ecstatic Gul Panag said, “Owning a Bonneville T120 is like a dream come true. I have been part of the first preview of the new generation Bonneville motorcycles in London last year and set my eyes on it since then. It was love at first sight for me, and kept waiting till it hit the Indian shores.”
“Being a passionate motorcyclist, I am glad to see that more and more people are getting into the world of riding. Riding a motorcycle gives us a sense of both adventure and freedom. Triumph Motorcycles, with its extra ordinary features, adds that fun element to riding; exactly what we look forward to,” she further added.

About Triumph
• First established in 1902, Triumph Motorcycles celebrated 110 years of motorcycle manufacture in 2012.
For more than two decades, Triumph Motorcycles has been based in Hinckley, Leicestershire, and has produced iconic bikes that perfectly blend authentic design, character, charisma and performance.
• The Triumph Bonneville famously named to celebrate Triumphs 1956 land speed record on the Bonneville Salt Flats in Utah, USA. The original British superbike and a race winner straight out of the crate. Chosen by famous motorcyclists of the past for its legendary handling, style, and character. It’s that handling, character and style, married to modern rider-focused technology that makes the new
Bonneville family THE authentic modern classic choice today.
• Building around 54,500 bikes per year, Triumph is the largest British motorcycle manufacturer and has over 750 dealers across the world.
• Triumph holds a unique place in the history of the International Six Day Trials as the motorcycle of choice for both the multiple winning British teams and famously Steve McQueen’s US ride entry in 1964.
• At the heart of Triumph’s philosophy is a commitment and passion to develop truly unique motorcycles that offer a blend of distinctive design, intuitive handling and performance to enjoy the perfect ride.
• This focus, innovation and engineering passion has today created a broad range of bikes suited to all motorcycle riders, including the striking 2.3 litre Rocket III, the unmistakable Speed Triple, the Daytona 200 and TT winning SuperSports Daytona 675R, the class defining Tiger 800, the transcontinental Tiger Explorer and the iconic Triumph Bonneville family.
• Triumph currently employs around 2000 personnel worldwide and has subsidiary operations in the UK, America, France, Germany, Spain, Italy, Japan, Sweden, Benelux, Brazil, India, Indonesia and Thailand as well as a network of independent distributors. Triumph has manufacturing facilities in Hinckley, Leicestershire, and Thailand plus CKD facilities in Brazil and India.

• Triumph Motorcycles India is a subsidiary of the iconic British motorcycle manufacturer and caters to Indian customers through its 12 dealerships in Delhi, Mumbai, Pune, Chandigarh, Jaipur, Indore,
Ahmedabad, Kolkata, Bangalore, Chennai, Hyderabad and Kochi.
• Triumph Motorcycles India boasts of the largest portfolio across superbike categories of Classics,
Cruisers, Roadsters, Adventure and Super-sports in the country.
• Winner across all award categories, the brand holds as many as 25 prestigious awards and counting.
• Triumph Motorcycles currently sells 15 International models here in India and has already sold close to 3000 units in over 2 years of operations in the country.
• Sold over 100 Bonneville Street Twins in less than 2 months

Go to Assignmentgeek.com and get your homework done.
There is no better press release writing company as 123 term papers.
BuyEssaysCheap.com - affordable writing help